Binge drinking of vodka, obesity and decreased physical exercise are the main reasons of CVD in Russia.

The prevalence of lifestyle diseases particularly Cardio Vascular Disease (CVD) has been a major public health problem in Russia as the largest country of the world is among the top nations on CVD mortality. The lack of significant improvement in CVD cases in Russian Federation especially in the working age of the male population is alarming. 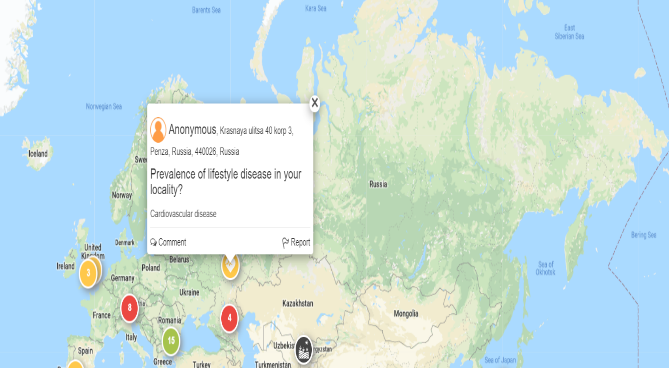 In the recent researches, the high rate of CVDs in Russian population was found to have a direct correlation with binge drinking of wine especially vodka (spirit). Individuals with obesity were also more likely to have indicators of poor cardiovascular and metabolic health. Unhealthy diet, tobacco consumption, air pollution and other environmental risks coupled with low physical activity increase the risk of CVD in Russia. The Russian government is presently implementing the International Project on Cardiovascular Disease in Russia- 2014 - 2019 (IPDCR) to control CVD.

As per the study by WHO, about 1.87 million people died out of 144 million population of Russia in 2016. The most prominent disease such as cardiovascular or heart disease was the leading cause of death with 55%. According to WHO 2013, the mortality rate of Russia (55%) from CVD was higher as compared to European countries (46%). As per the study from The Lancet, it is found that ischemic heart disease and cerebrovascular disease were the leading cause of death or Year of Life Lost (YLL) in Russia in 1990 and in 2016 as well. CVD was caused by many risk factors. In 2016, about 54% deaths in Russia caused by behavioural risk factors, about 49% by metabolic risks, about 8% by environmental and occupational risks, 32% by high systolic blood pressure, 24% by smoking, 18% by alcohol consumption, 23% by high total cholesterol, etc.

The gap in wages among the population is also triggering the population to follow an easy lifestyle with no physical activity and unhealthy diet schedule that further promotes obesity with heart-related diseases like CVD in larger urban centres such as Moscow. In 2000, the gap of wages was not so much but with time it became huge as the wages of people of Moscow was 2-3 times of wages of people of other cities. Impacts of this were seen in various activities like increased alcohol consumption and smoking in Moscow city as compared to other cities. Obesity was found as the main indicator which caused cardiovascular diseases (CVD). As per the study of Journals of Hypertension, in many parts of Russia, obesity was found as the leading risk factor to cause heart diseases. In 2012, approximately 737,000 death occurred due to Ischemic Heart Disease or Coronary Artery Disease in Russia.

As per the study from NCBI 2017, the Government is putting efforts to reduce the number of deaths caused by CVD. In 2008, CVDs have been highlighted and since then the government took steps to promote a healthy lifestyle and to prevent non-communicable disease like CVDs. In response to these steps, Russia joined the WHO Framework Convention on Tobacco Control and signed the Antismoking Concept in 2010. In 2013, federal law came into effect for the cigarette and after that 21% tax was increased on the cigarette and imposed the ban on smoking in public places. In 2014, the government launched the program, i.e. "Development of Healthcare till the 2020 year" with subprogram on prevention of NCDs and healthy lifestyle. In 2013-2020, besides governments policies and projects, WHO Global strategy and the WHO action plan have been implemented to control the non-communicable diseases for achieving, SDGs.

Besides above, the government did work on healthcare infrastructure. In 2005, National Priority Project 'Health', program was launched by the government to detect and monitor the risk factors for CVD and other non-communicable diseases. In 2009, about 695 health institutions/centres were launched under the National priority project "Health". The service in those institutes was free of charge for Russians. Health institutions/centres rapidly gained popularity and, in 2015, increased to about 806. According to the study of the European Heart Journal, 2016, a positive trend was seen in the reduction of cardiovascular mortality rate in Russia. As per the study from NCBI 2017, life expectancy was increased by 6.6 years among males and 4.6 years among females between 2003-2014. As an effect of the government efforts by launching programs from 2005, the mortality rate decreased by 34.3% up to 2013; and newly diagnosed patients with CVDs increased by 16% from 2005-2012.

Public education is the primary factor for promoting physical activities, healthy lifestyle and adequate diet, reduction in alcohol consumption and smoking, etc. It is recommended to design and implement objective public awareness campaigns to mitigate/reduce the risk related to CVD. Also, participatory monitoring is recommended to do real-time monitoring of the impacts of initiatives by the government and voluntary organization. As the Yoga has been globally accepted and is being practiced for a healthy life, India and Russia could iron out modes for cooperation in addressing the lifestyle-related diseases.

Pawan Kumar is a Public Health Specialist with VisionRI

British finance minister Rishi Sunak will announce new plans to support jobs on Thursday, as fears mount of a surge in unemployment when an existing 52 billion pound 66 billion support programme comes to an end in just over a month. Sunak h...

Rajasthan Election Commissioner P S Mehra on Wednesday held a meeting with officials of the Home and Police departments and gave necessary directions to conduct panchayat election in a free, fair and peaceful manner. Mehra reviewed the law-...

1 officer indicted in Breonna Taylor case; not for her death

A Kentucky grand jury on Wednesday indicted a single former police officer for shooting into neighbouring apartments but did not move forward with charges against any officers for their role in Breonna Taylors death. The jury announced that...

When is Rick and Morty Season 5 be released Fans are passionately waiting to know the release date of the fifth season. The series has significant fan base across the world with many predicting that the team already commenced working on Ric...