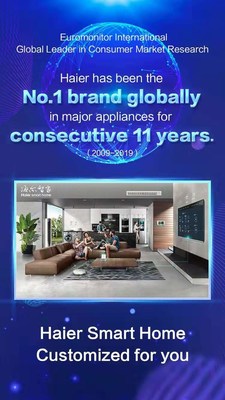 "We are honored to again be the world's top major appliances brand for the 11th year in a row. Haier is constantly striving to listen to consumers' changing needs and adapt to them, while simultaneously harnessing cutting-edge technology to stand out in the market," said Wang Ye, Vice President and General Manager of Smart Home of Haier Home Appliance Industry Group.

Haier's dominance in home appliances is a result of an ongoing commitment to R&D, and its ability to adapt its business model to the latest technology and consumer trends. Over the past decade, the home appliance industry has radically transformed with the rise of the internet, IoT, AI and 5G. Rather than ride the trends, Haier has defined them with revolutionary products, from the Clean-Free washing machines to refrigerators with fresh storage boxes.

This is set to continue in the future: during its 35th anniversary, Haier revealed its next stage of development, which puts customization, globalization and its IoT ecosystem brand at the core of its strategy.

Always in pursuit of new ways to engage with consumers, Haier has also implemented its "RenDanHeYi" 10+N R&D model in the past decade -- an open entrepreneurship platform that integrates quality global resources to meet the diverse needs of users.

In recent years, Haier's desire to reimagine the future has only strengthened its position as the world's leading significant appliances company. In the Industry 4.0 era, a new Haier has emerged to meet the increasingly sophisticated experiences demanded by consumers in the age of connected smart homes. Instead of manufacturing smart appliances, Haier engineered a smart home ecosystem that harnesses IoT and smart appliances to enhance the quality of life. In a company first, Haier launched its official Haier Smart Home app in 2019, which allows users to infinitely customize their smart home experience based on user scenarios, rather than products. A live stream video accompanied the app launch -- within one day, Haier received over 31,337 orders for over 2,440 different home designs.

There was no Pakistani aircraft within 150 kms of our strike package, says former IAF Chief on Balakot airstrike

Commonwealth Games gold medallist Manu Bhaker on Wednesday said she is focussing on her technique and improving mental strength to put up a good show at the upcoming World Cup and Tokyo Olympics. Manu, who secured an Olympic quota for India...

Despite a tough economic climate and a revenue shortfall of R63 billion, Finance Minister Tito Mboweni has announced tax measures that will give consumers some room to breathe. For example, a teacher who earns on average R460 000 a year wil...

The Delhi government will give a compensation of Rs 1 crore to the family of head constable Ratan Lal who was killed in violence in northeast Delhi, Chief Minister Arvind Kejriwal announced Wednesday.As per the Delhi governments policy, we ...

Pankaj Tripathi says his cameo appearance in Angrezi Medium is a gift to mentor-figure, actor Irrfan Khan, who has been the biggest inspiration in his career. The film marks Tripathis first collaboration with Irrfan and he said it was a no-...