Lack of awareness on the breast feeding is one of the major reasons for under nourishment among children in Zimbabwe.

There may be a set of technical reasons but it's a bare fact that the non-availability of food is the main cause behind increasing undernourishment in Zimbabwe to which children are the most vulnerable. As part of participatory monitoring, Devdiscourse is receiving the feedback that the food is not available even for children in several parts of the country, which is more problematic in rural areas. The World Food Programme in recent data has revealed that in the peak of the lean season of 2019 around 5.3 million people face food insecurity in Zimbabwe. It is worthwhile to mention that around 1.5 million people had faced food insecurity in the same season in 2015-16 which was an alarming 164 per cent increase in food insecurity.

Devdiscourse's initial data also validate the pitiable condition of food insecurity in Zimbabwe where food is a scarcity due to a variety of reasons. The data is available on Devdiscourse's geospatial platform for participatory monitoring of SDGs that aims to generate the data required for participatory monitoring of SDGs and facilitate the robust implementation of Global Goals 2030. 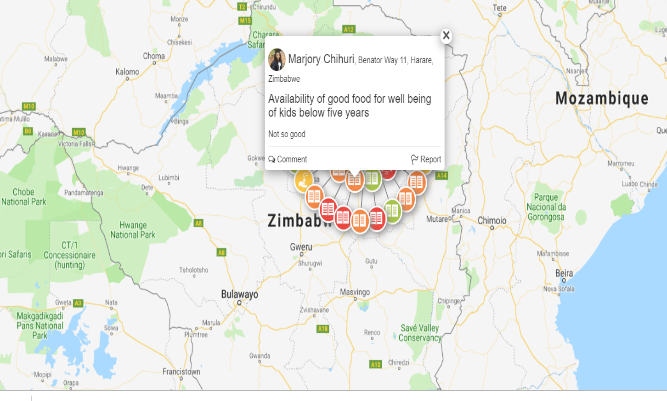 Furthermore, in a study in 2018, it was revealed that children are lacking nutrients in their body as the mothers were not aware of the importance of breastfeeding and their nutritious requirements. It was found that around 25 per cent of children were suffering from vitamin A and 75 per cent had an iron deficiency. Stunting level among children is varying geographically from Bulawayo (19 per cent) to Matabeleland (31 per cent). The difference in stunting level is also seen according to the level of maternal education. It was found that the mothers of 25 per cent of stunted children had secondary level education while the mothers of 45 per cent of stunted children had no formal education.

According to the study by USAID, poor feeding practices contributed to child malnutrition in Zimbabwe. This is also substantiated by a report Zimbabwe Profile 2018, which reveals that only 58 per cent of children were breastfed within the first hour of birth. Less than 50 per cent of children of 0-6 months age were breastfed and further the percentage of children of 4-5 months' age decreases to 20 per cent with a minimum acceptable diet. Girls education and early marriage are the key reasons for poor breastfeeding.

Risk of stunting is usually high among newborn babies. Besides, early motherhood (under 18 years) is also the key cause in the contribution to malnutrition status among children.

The open defecation in rural Zimbabwe is as high as 30 per cent, which is also a major reason behind the spread of infectious diseases causing malnutrition and stunting growth. The policies implemented by the national government like Food and Nutrition Security Policy (2013), National Nutrition Strategy (2014–2018), Interim Poverty Reduction Strategy Paper (2016–2018) and National Food Fortification Strategy (2014–2018) have provided limited results. The policy interventions are still continuing in the form of Enhancing Nutrition, Stepping Up Resilience and Enterprise (ENSURE) (2013-2018), Amalia (2013-2018) and Feed the Future Zimbabwe Crop Development Program (2015-20). However international community need to play more proactive role to help Zimbabwe overcome the food insecurity and save innocent children from malnutrition.

Trump postpones G7 summit, to be held in September now

Rethinking Rural Livelihoods in the Times of COVID-19

The reverse migration caused by COVID 19 pandemic has put an additional burden of about one crore people on Indian villages particularly in the states of Uttar Pradesh, Bihar, Bengal and Odisha. Besides increasing the risk of spreading the ...

‘Discounted Deaths’ and COVID 19: Anthropology of Death and Emotions

Death is a social event rather than the mere cessation of biological functions. As seen by anthropologists, death is not just physical but intensely social, cultural, and political....

Generally, it has been observed that the majority of the academicians in higher education institutions neglect the wisdom of community people and throw their weight around thinking that they know everything and the community knows nothing. ...

The system, if implemented effectively, will allow Pakistans revenue service to combat the illicit trade in tobacco products and potentially add hundreds of millions of dollars to the states budget each year. ...

U.S. cities brace for another violent night as protesters rage against police brutality

Dozens of U.S. cities on Sunday were bracing for another night of unrest after cleaning up streets strewn with broken glass and burned-out cars as curfews failed to quell confrontations between protesters and police. What started as peacefu...

Civilians killed as park hit by shelling in Libyan capital

A grassy area used as a park in the Libyan capital Tripoli was hit by shelling on Sunday that left at least three people dead and several others wounded, medics said. The incident highlighted a continuing risk to civilians despite a relativ...

The new coronavirus is losing its potency and has become much less lethal, a senior Italian doctor said on Sunday.In reality, the virus clinically no longer exists in Italy, said Alberto Zangrillo, the head of the San Raffaele Hospital in M...

The Modi government on Sunday released an e-booklet highlighting its key achievements during the second term in which it stated that India was among the first few countries to put in place a comprehensive action plan to stop the spread of c...