Though the LG WING runs on Android 10, the company recently confirmed that its premium smartphones including WING will get up to three iterations of Android OS updates from the year of purchase.

LG's innovative dual-screen smartphone - WING - will be available at a huge discount of Rs 40,000 in India. The device was launched in October 2020 at a starting price of Rs 69,990.

As part of the Flipkart Flagship Fest which is kicking off on April 13th, the LG WING's 8GB+128GB model will be available for purchase at a discounted price tag of Rs 29,999 with the company promising a 1-year warranty and 5 years of service to the customers. 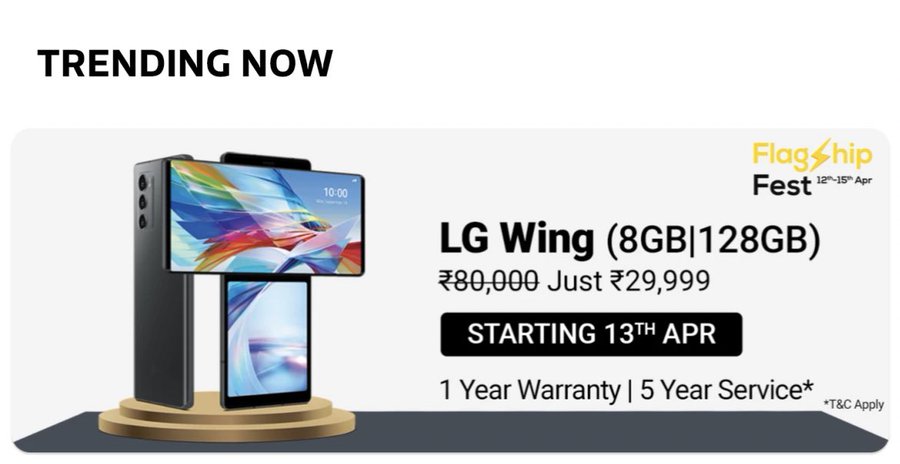 The LG Wing sports a 6.8-inch FHD+ OLED FullVision main display with 2460 x 1080-pixels resolution and an aspect ratio of 20.5:9. When rotated in 90 degrees in the clockwise direction, a 3.9 inch hidden secondary screen with a 1.15:1 aspect ratio appears.

Under the hood, there is Qualcomm Snapdragon 765G 5G Mobile Platform coupled with 8GB RAM and 128GB of internal storage which is expandable up to 2TB via a dedicated microSD card slot.

The device is fuelled by a 4,000mAh battery that supports 25W Quick Charge 4.0 as well as 10W wireless charging. Other features include- an in-display fingerprint sensor, USB Type-C port, WiFi 802.11 a/b/g/n/ac and Bluetooth v5.1.

Though the LG WING runs on Android 10, the company recently confirmed that its premium smartphones including WING will get up to three iterations of Android OS updates from the year of purchase.

Actors Bradley Whitford and Alice Braga have signed on to feature in the upcoming film Share.Described as an innovative sci-fi movie, the project will be helmed by Ira Rosensweig and will also star actors Melvin Gregg and Danielle Campbell....

Andhra Pradesh on Thursday seized ten tonnes of rice that was intended for public distribution being illegally transported to Tamil Nadu. According to Karuru Sub-Inspector Vamsidhar, Police caught a lorry transporting ten tonnes of PDS Publ...

US reissues travel advisory urges Americans not to travel to India

The US has reissued its travel advisory on India, urging its citizens not to travel to the country due to an unprecedented surge in the COVID-19 cases there.India is struggling with a second wave of the pandemic with more than 3,00,000 dail...

With the addition of 3,017 new cases of coronavirus, the infection count in Thane district of Maharashtra has gone up to 4,80,194, an official said on Thursday.These new cases were reported on Wednesday, he said.The virus also claimed the l...