Industries and individuals alike had high expectations from the government to take tangible steps but the budget 2020 seems to have failed expectations.

India's Finance Minister Nirmala Sitharaman announced the Union Budget for FY2020-21 on Saturday. This was the toughest budget for India in over a decade as the economy, which was crowned as 'fastest-growing major economy' till last year, struggles through a slowdown.

Industries and individuals alike had high expectations from the government to take tangible steps that would spur demand and support the struggling sectors. However, the budget seems to have failed the expectations according to a sentiment analysis conducted by Devdiscourse in collaboration with VisionRI. We tried to decipher public mood on the budget by conducting the analysis through a scientifically proven methodology.

As part of this analysis, approximately 18,000 unique tweets that contained the hashtag #Budget2020 were analyzed pre-budget and almost the same number of tweets were analyzed after the budget was announced. The sentiment analysis is based on the data extracted from Twitter from January 25, 2020, to February 2, 2020, by using API (application programming interface).

The pre-budget analysis of tweets shows that the sentiment of people was 69 percent (Fig. 1) positive regarding the budget. Industry experts had also expressed faith in the government in their pre-budget expectations, especially after some bold moves like reducing corporate tax in the preceding months. 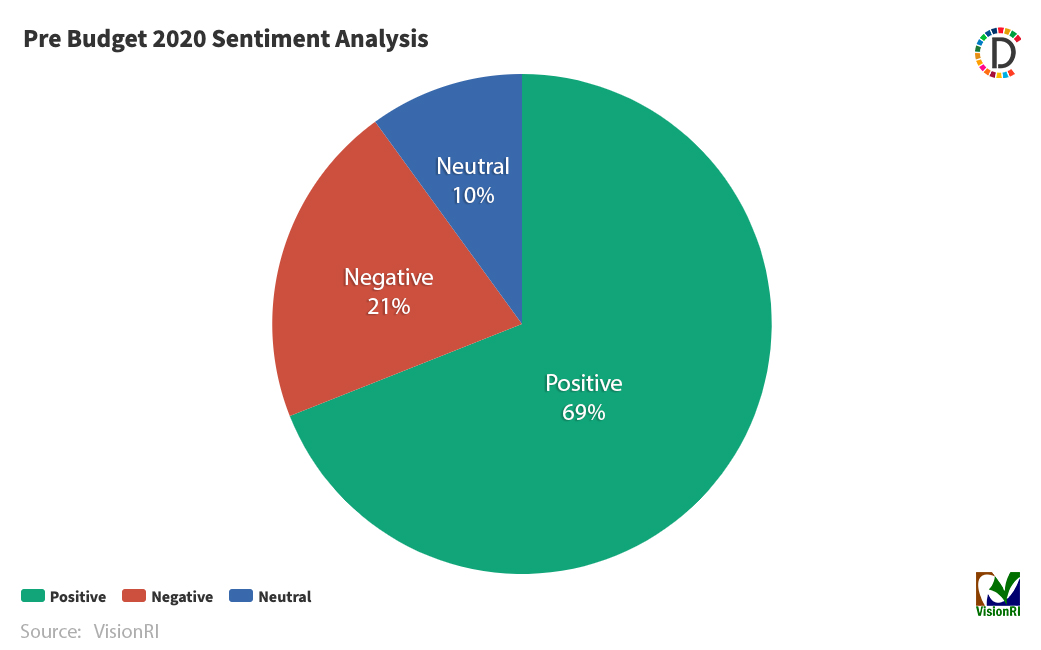 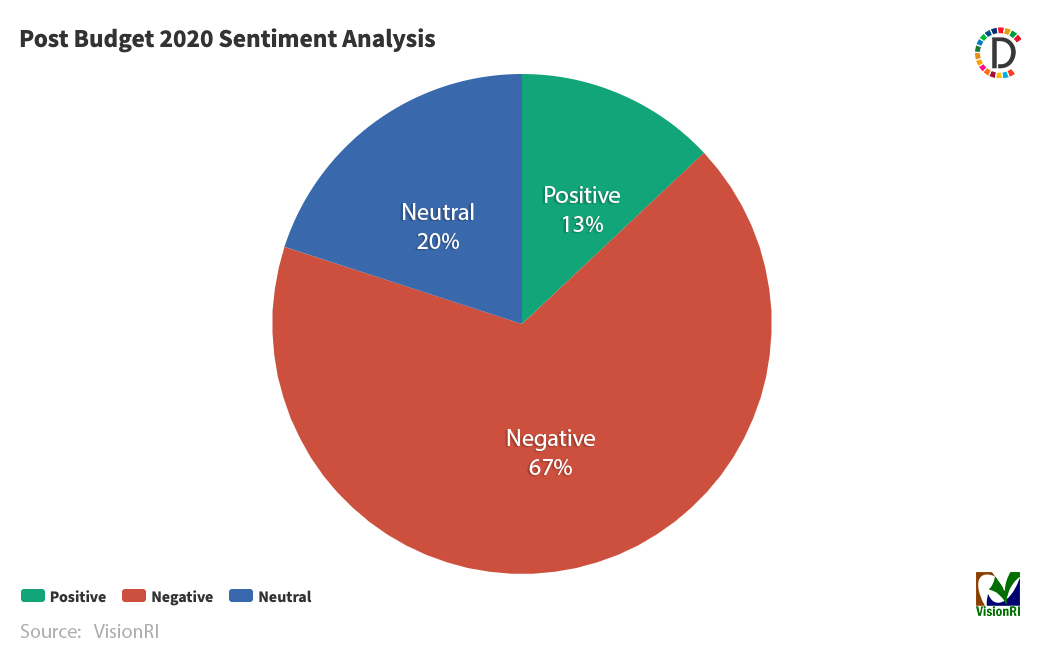 Industry experts in their post-budget reactions also expressed disappointment as the budget didn't include specific measures to spur revival on a sectoral basis while many also argued that even the measures announced were also "too long-term" and may not do much to revive the struggling economy.

"The government has aimed at some measured moves in the budget to bolster growth. Most of these, however, are not expected to provide a short-term boost," said a post-budget Crisil report.

And the individual taxpayers were also disappointed due to the confusion with the reduced income tax rates. The new tax regime brought in the budget would be "optional". Taxpayers will have a choice to either remain in the old regime with exemptions and deductions or opt for the new reduced tax rate without those exemptions.

Many experts argue that the new "simplified" tax regime would end up further complicating it, at least during the initial stages as taxpayers will have to evaluate what works best for them and investing via 80C may be discouraged.

Indian stocks took one of the worst budget-day hits on Saturday as Sitharaman concluded her speech. Sensex and Nifty fell to their lowest closing level in more than three months. Although the removal of dividend distribution tax could support revival, analysts say that investors had expected more, something like reduction or removal of taxes on long-term capital gains that could support both consumption and investment.

The stock market traded almost flat on Monday as investors remain cautious ahead of the release of key macro data and earnings as well as the Reserve Bank of India's monetary policy statement scheduled on 6 February.

Approximately 36,000 tweets containing hashtag #Budget2020 were extracted and subjected through three methods of natural language processing – BING lexicon, NRC lexicon, and AFINN lexicon – for sentiment analysis. The data extracted from Twitter contains tweets posted from January 25, 2020, to February 2, 2020, by using API (application programming interface). Retweets are not taken into consideration in this analysis.

(Disclaimer: The conclusions drawn in the sentiment analysis are subject to technological limitations of data extraction and methodology(ies) used for data processing. This study is based on the analysis of tweets only and the retweets were not taken into account. All the available precautions have been made to maintain the objectivity of the research and its presentation in a scientific fashion.)

Maharashtra revenue department set for a facelift with blockchain technolog...