SDG 6: Should public toilet complexes have more blocks for women?

On the occasion of the World Toilet Day on November 19, 2019 the United Nations expressed serious concerns on lack of toilet facilities for 4.2 billion people in the world. However, there is another aspect of the problem. The needs of female toilet blocks at public places are increasing because more and more women are breaking the traditional boundaries and actively participating in socio-economic activities throughout the world.

Toilet is a basic need of every human being, it is due to this the UN has included a target under SDG 6 to provide toilet for every person by 2030 and prominently highlighted this on World Toilet Day 2019 (#WorldToiletDay2019). However, the requirement for toilet spaces is now taking a gender perspective.

As across the communities more and more women are coming out of the four walls of the home, the need of female toilet blocks particularly urinals at public places are increasing which is compelling the policy makers to think – what should be the ideal ratio for women toilet blocks in the public toilet complexes?

Highlighting the importance of toilets on the occasion of World Toilet Day on 19th November, 2019 the United Nations in a statement said, "A toilet is not just a toilet. It's a life-saver, dignity-protector and opportunity-maker. Whoever you are, wherever you are, sanitation is your human right,". However, this human right is not available to all as according to the UN about 4.2 billion people, almost half of the world population live without safely managed sanitation.

Though the British Standards Institution has recommended a ratio of 2:1 for public toilet complexes which means for every single toilet block constructed for men there should be two toilet blocks for women, these guidelines are rarely followed. This is because creating male urinals require less space and cost than creating female toilet blocks. The sanitation agencies throughout the world create more urinal blocks for men than toilet seats for women. This pattern was ideal when there were less women on public places than men but now as women are coming out in the public places, the requirement has increased. 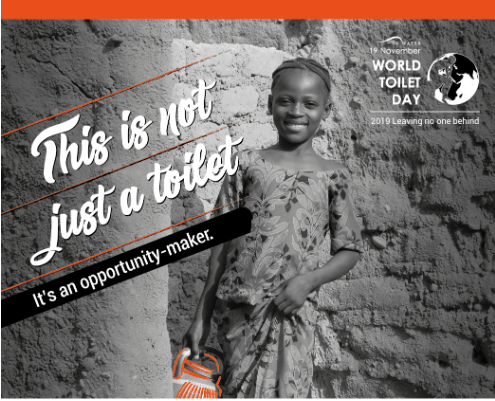 Furthermore, most of the agencies throughout the world have no proper guidelines for making toilets for the transgender community who also need to be made aware about their rights. According to some reports, the members of transgender and gender non-conforming people face hostility and even attacked if they are perceived to be in the wrong toilet.

In the line of the Sustainable Development Goal (SDG) 6 which promises sanitation for all by 2030, the United Nations on the occasion of World Toilet Day 2019 gave a call to provide toilet facilities for all. However, the problem is not confined to just providing toilet facilities to 4.2 billion people. This is because this target is primarily focused for addressing household requirements.

The policy makers and implementing agencies need to design a plan to meet the requirements of toilets at public places. In fact, this problem of increased waiting time due to long queues in front of female public toilets is often visible at places of public gathering such as cinema halls, transport hubs etc. "The ladies are about to storm the men's loos", said British actor Joanna Lumley in an appeal to increase the number of toilets for women who face long lavatory queues at London's historic Old Vic theatre, last year. In England, the historic places like Victorian theatres often face this problem due to lack of space for more toilets. The international agencies need to focus on the target of SDG 6 which commits to paying special attention to the needs of women and girls and those in vulnerable situations.

Will the implementing agencies come with a better plan for appropriate number of female toilet blocks to meet the increasing requirements of women at public places? This is still a million dollar question.

The World Solar Bank aims to infuse USD 10 billion in solar energy projects in countries which are members of the International Solar Alliance ISA, a senior official said on Tuesday. Participating in a webinar organised by the India Energ...

Commerce and Industry Minister Piyush Goyal on Tuesday emphasized on the role of small traders, Indias data sovereignty and economic reforms while speaking at the virtual G20 Trade and Investments ministers meet. The third meeting of the G2...

World champion Ronnie OSullivan was handed a bye to the second round of the European Masters on Tuesday after Welsh opponent Daniel Wells tested positive for COVID-19. Wells was one of five withdrawals from the Milton Keynes tournament, wit...

British Prime Minister Boris Johnson is set to win a parliamentary vote on Tuesday on laws which give him the power to break the Withdrawal Agreement struck with the European Union last year.Johnsons Internal Market Bill aims to ensure Brit...