For the first time in its history, Jawaharlal Nehru University (JNU) Administration is seeking permanent deployment of local police to keep protesting students at 100 meters away from the Administrative Block. It would be interesting to see how the JNUSU, which is credited to introduce several innovations in student politics of India, will keep itself vibrant and effective.

This came as a huge relief for the JNU administration which was groping in the dark to control the ongoing students' agitation since past over 40 days. However, the order of Delhi High Court paving the way for permanent deployment of local police in the campus will always be remembered as a failure of the administration in protecting the rights of students and democratic values in the campus.

The university administration on Wednesday issued a circular asking the students to abide by the order of Delhi High Court. It reads, "The police authorities shall ensure that the 100-meter area is cordoned off, in whatever manner, so as to ensure that the Administrative Block is accessible to the staff and administration of JNU, so that non-agitating students are not inconvenienced." It further added, "As per the above order, clearly, if any protest has to be taken, the same would have to be beyond 100 m radius of the Administrative Block in a manner so as to not hamper the functioning of the university. Ingress and egress to the Administrative Block could not be stopped in any manner whatsoever,". In the initial lines, the High Court mentioned that the 'police ought not to encourage to enter a university campus' but issued the order in view of 'complete lockdown' reported by the Registrar.

However, the university administration could not succeed in its attempt of using the Delhi High Court order to goad the students towards examination halls which started on Thursday. The students across faculties showed solidarity with JNUSU and boycotted the end semester examinations. This forced the administration to initiate dialogue with JNUSU office bearers by the evening. The university has now put two conditions before students to grant them two weeks' time for appearing in the examinations – firstly, accept the revised hotel fee and secondly, ensure peace and tranquility in the campus. In the meeting, the Vice Chancellor Mr. M. Jagadesh Kumar also communicated to the students that his proposal is based on the decision of the Ministry of Human Resource Development (MHRD).

Has JNU surrendered before MHRD?

In fact, the policy of the incumbent JNU administration to follow each and every instruction of the MHRD is the root cause behind the ongoing student agitation in campus. The university's autonomy is allegedly being compromised and Administrative Block has been reduced as extension office of the MHRD. This is the reason the students have lost confidence in the administration.

Surprisingly, almost all the prestigious institutions in India which were created with a vision to provide education to the deserving students without any discrimination on basis of their paying capability, are surrendering before the MHRD. The purpose of making JNU in 1970s was not just to add one more university in already existing lot of universities but to provide opportunities to the talents from throughout the country particularly those hailing from remote areas, villages, and tribes. It's the only university in the country which provides relaxation and weightage to the students of backward districts. As school education in India is not homogenous throughout the country, JNU emerged as a platform for dialogue across the classes, communities and political groups etc.

The ongoing student agitation should not be viewed as a protest against a few bucks but a protest against attack on this very plurality and tradition of cross-cultural and inter-community dialogues, the university has nourished in the campus. Here, the very argument of the MHRD that the fee in JNU is very low and should be at par with other Central universities, requires a fresh look. The MHRD and University Grants Commission (UGC) need to have a fresh thinking on their project of imposing uniformity in all the prestigious universities and institutions. MHRD's push for commercialization of educaiton from pre-primary to university level may look rosy to some but it will cause irreparable damange to entire education system in India. 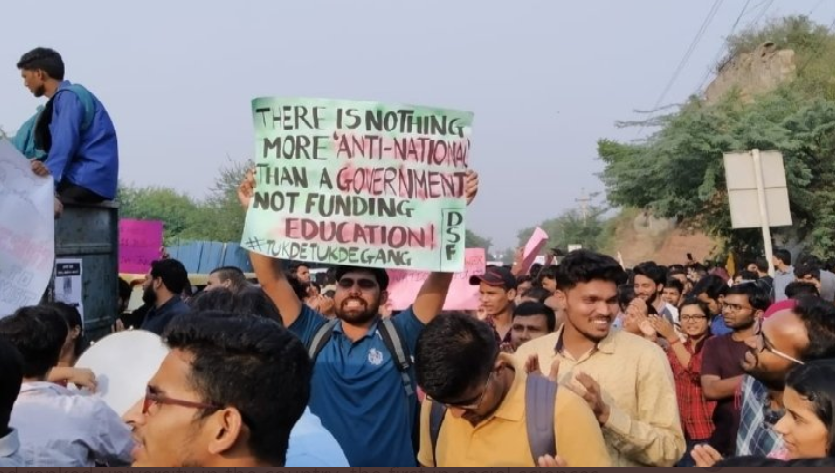 Police no substitute to Dialogue

The biggest problem of our time is decreasing tendency on dialogues. This tendency of a small group making decisions for the country and implementing it with the help of security forces is new to India, which trusted on dialogues for centuries.

The ongoing protest of JNUSU is also a result of the same tendency. Though JNU has developed a healthy tradition of dialogue on each and every issue, the administration on October 28 came with a set of rules and regulations to impose a dress code in the campus, new set of hostel rules and fee hike. As the protest of students intensified, the administration withdrew step by step. If the administration had opted for dialogues, the protest would not have been so violent in the campus. The two downward revisions in the proposed fees are not based on any logical thinking or dialogue between administration and protesting students but are the results of pressure mounted by protesting students. All these issues could have been resolved without intervention of the police either inside the campus or outside.

There is great need to revive the tradition of dialogue in the campus. The permanent deployment of local police at Administrative Block and personal security to administrative officials may ensure administrative working but will defeat the very foundations on which the JNU has developed.

Malwarebytes says some of its emails were breached by SolarWinds hackers

Cybersecurity company Malwarebytes said on Tuesday that some of its emails were breached by the same hackers who used the software company SolarWinds to hack into a series of U.S. government agencies. In a statement, the Santa Clara, Califo...

Following is a summary of current science news briefs.Chinas retrieved lunar samples weigh less than targetedLunar rocks retrieved by a historic Chinese mission to the moon weighed less than initially targeted, but China is still willing to...

Following is a summary of current people news briefs.UKs Meghan seeks lawsuit win without trial after triple-barrelled assault on her privacyA tabloids publication of a deeply personal letter written by Meghan, Britains Duchess of Sussex, t...

Odd News Roundup: King toppled from throne by gender-neutral card deck; Goalkeeper coach suspended for one sprinkle too many

Following is a summary of current odd news briefs.Goalkeeper coach suspended for one sprinkle too manyProfessional sport demands finding an extra edge wherever you can, but the goalkeeper coach of Zambia Super League side Forest Rangers cro...