US, UK, China, Russia and India are not among top 10 countries in he list.

Policy making is a tough tak but implementation is tougher. This was acceped in a report by the Economist Intelligence Unit (EIU), an independent body, released on Tuesday. The experts have categorically mentioned that the implementation of policcy remains the largest challenge to preparing students for the challenges that awiat them in work and society. According to the study Finland's universal future skills strength across all index pillars including policy and teaching environment and access to technology see it retain its lead among 50 economies in the third edition of the Worldwide Educating for the Future Index (WEFFI), produced by The Economist Intelligence Unit and commissioned by the Yidan Prize Foundation.Sweden and New Zealand ranked second and third, with Sweden advancing two places and New Zealand maintaining its third position from 2018's results.The Philippines, Ghana and Mexico all performed strongly among a new income-adjusted ranking due to their ability to channel their more limited resources to implement strong policy and advance a future skills agenda. Among the world's largest economies, the US, UK, France and Russia all fell in their rankings while China, India and Indonesia advanced their scores.

Themed 'From Policy to Practice', the white paper is commissioned by the Yidan Prize Foundation and based on the findings of the third annual Worldwide Educating for the Future Index. With a focus on young people aged 15-24 in 50 economies, it measures three pillars of education systems--policy approaches, teaching conditions and broader gauges of societal freedom and openness--as a means of readying young people to meet the challenges of work and society in future. It remains the only major ranking to assess inputs to education systems and stands in contrast to measures like the OECD's Programme for International Student Assessment, which looks at exam-like outputs.

The report shows that the need to develop future skills like critical thinking, creativity, entrepreneurship and analysis is more vital than ever given the continuing advances in technology and artificial intelligence. A number of countries, including Finland, Sweden and New Zealand, are embracing this education challenge through comprehensive policies, well-trained teachers and strong assessment frameworks to test for future skills. A new income adjusted ranking also showed that many lower-income countries, including the Philippines, Ghana, Mexico and Vietnam, are also performing well with particular strengths in their policy and teaching environments.

Among developed countries, the UK and the US demonstrated notable ranking declines, falling from 10th and 18th respectively in 2018 to 15th and 22nd in 2019. With Brexit coming to dominate the political agenda in the UK and a decentralized education system weakening national policy objectives in the US, inattention to education is beginning to have a significant impact, as reflected in falls in the education policy environment in these countries. 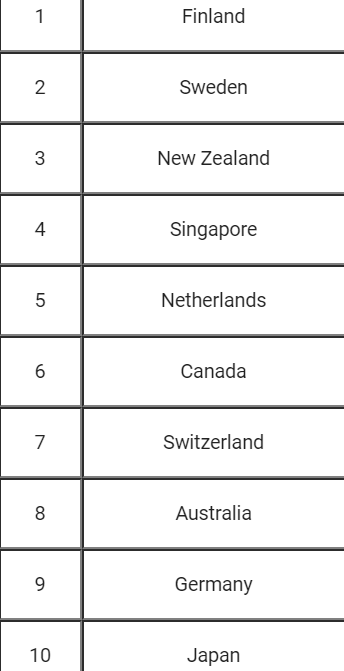 "The third edition of the index shows that while more economies have incorporated the future skills agenda into their education policies over the past two years, policy implementation still remains weak in many nations," Georgia McCafferty, editor of the report said. "Progress in adapting assessment frameworks, quality assurance frameworks and teacher training all need to accelerate."

"The recent rise of nativism and populism in some quarters of the world, along with a rejection of globalisation, makes the need for students develop future-oriented skills like critical thinking and analysis even more urgent in order for them to combat these forces," she added.

UPDATE 1-Norway finmin quits over IS woman's return from Syria

SpiceJet official lashes out at pilots for focussing on 'trivial' issues

From home to healthcare, here are Robotic innovations transforming lives

Lovot is equipped with more than 50 sensors&#160;such as&#160;thermography,&#160;microphone array,&#160;obstacle detection, and touch sensor to generate motion and emotions in real-time....

SDG13: How you can reduce global warming by changing your food habits

The mega narratives of various international organizations give the impression that fighting global warming is only a job of government agencies. However, the European Investment Bank EIB has designed a questionnaire which besides making th...

Application of contemporary and future information technologies may go milestones in advancing sustainable development goals SDGs provided the challenges are overcome and implementation is ensured....

With China poised to increase purchases of U.S. agricultural goods this year as part of a Phase 1 China trade deal, the U.S. Agriculture Secretary said on Monday there is no need for a third year of trade-related aid for farmers.Farmers hav...