The ensuing controversies on Exit Polls 2019 have raised serious doubts on the credibility of survey centric poll predictions. Therefore, a mixed method approach by using various tools of psephology for a scientific poll prediction is required.

As most of the exit polls have rammed into controversies, the Devdiscourse attempts to present a scientific prediction on results of Lok Sabha Election 2019 through a reasonable blend of various approaches in psephology by giving due weightage to various tools. They include random poll survey, winning margin of NDA in 2009 and 2014, winning margin and voting trends in immediate assembly elections in the concerned states, the impact of political alliances and the political issues among voters. Besides, random sampling survey on social media and media reports during the campaign on concerned parliamentary constituencies were also analysed. 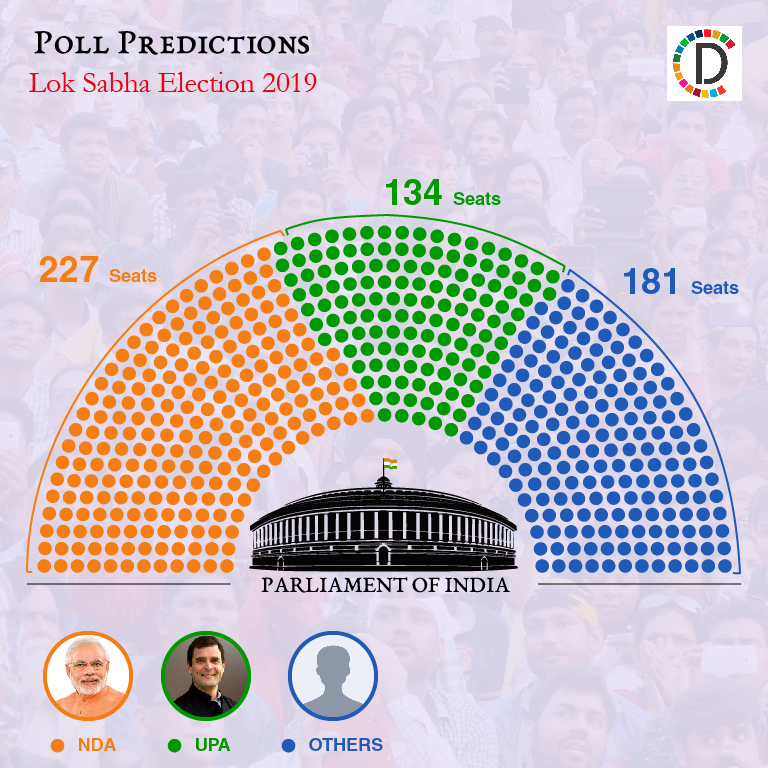 The inputs collected through these processes were compiled and put up before a panel of experts with diverse backgrounds for holistic discussions. After intensive brainstorming sessions on each of the 542 parliamentary constituencies, a consensus was reached which predicts 134 seats for UPA while NDA would finish at 227 seats. The regional political parties, however, would get around 181 seats and play a decisive role in the formation of next government at the centre. The state-wise predictions of the results for Lok Sabha 2019 are as under:

The political alliance of Samajwadi Party (SP), Bahujan Samaj Party (BSP) and Rashtriya Lok Dal (RLD) in Uttar Pradesh is most likely to emerge as a strong political force with around 42 seats. In the panel discussion, the experts rejected the figures of various exit polls giving BJP 50-68 seats in UP, as unrealistic. The presumption that Congress has eaten up only the votes of SP-BSP sounds bizarre. It seems the argument was framed to suit the pre-poll predictions by the exit poll agencies who had done pre-poll surveys before the formal entry of Priyanka Gandhi into the politics. In most of its probability, Congress has reportedly attracted a significant section of fence-sitting voters who had voted for BJP in 2014. In such circumstances, Congress may not get expected seats but has surely dented BJP's prospects. The SP-BSP alliance would comfortably reduce BJP to a maximum of 32 seats.

In West Bengal, there is consensus on an increase in vote percentage and seats of BJP but the chances of the saffron party crossing the double-digit are rare. Here in all the probabilities, TMC would remain the strongest political force with around 34 seats while BJP and UPA are likely to get around 4 seats each. The stronghold of Mamata Banerjee on the ground is still invincible for poor cadre strength of BJP on the ground in West Bengal. However, BJP tried it's hard to polarize West Bengal on the religious lines but the saffron brigade is most unlikely to get the numbers as claimed by BJP's top brasses. In the adjacent Orissa, BJP is expecting too high but we do not see a strong saffron surge. BJD may lose but is likely to remain the strongest political force in the state with 13 seats while BJP to follow with six MPs.

In Bihar and Maharashtra, both BJP and Congress have formed political alliances. In Bihar, Nitish Kumar's JDU is in alliance with BJP while Lalu Yadav's RJD has joined hands with Congress. Similarly, Maharashtra is facing a political battle between BJP+Shiv Sena and Congress+NCP alliances. In Bihar, NDA may get 27 seats while 11 seats may go to UPA. The Congress+ alliance may bag 18 seats for UPA while BJP+ alliance is expected to get 29 seats for NDA in Maharashtra. In Karnataka, UPA and NDA may get 14 seats each.

BJP's efforts to divide Madhya Pradesh onto religious lines may pay a political dividend in the form of 21 seats but the southern states like Andhra Pradesh, Telangana, Tamil Nadu and Kerala are still no go zone for the saffron brigade. We also predict a reverse in Rajasthan where Congress wrested power in Assembly Elections 2018. Here BJP may get 19 seats while ruling Congress is likely to finish at six seats.

The saffron outfit may taste some losses in Delhi, Haryana and Punjab compared to 2014 numbers. In 2014, BJP had bagged eight out of ten seats in Haryana; this time it seems to be seven seats. Delhi, however, remains largely unpredictable due to a strong triangular contest between BJP, Congress and AAP but there is a remote possibility for a repeat of 2014 results. Here BJP may get five seats while AAP and Congress could bag minimum one seat each in Delhi. In Punjab, NDA may get 5 seats while UPA may fetch 7 seats.

Production of Russia's COVID-19 vaccine to launch no earlier than fall: Virologist

63 more COVID-19 cases have been reported from Puducherry on Tuesday, according to the Union Territorys UT Health Department. As of 10 am on Tuesday, the total number of coronavirus cases in Puducherry stand at 1,530, including 684 active c...

Bengaluru, Karnataka, India Business Wire India The global pandemic COVID-19 has caused shockwaves in the world economy. Businesses everywhere are on a risk management mode right now, many sold out or shut down already, and employees are ...

Florida on Sunday reported a record 15,300 new coronavirus cases, the most by any state in a single day even as the coronavirus cases in the country have surged to 3,363,056. The Washington Post reported that the huge number was result of b...

Bars and inside restaurant dining are banned throughout California, while indoor religious services, gyms and hair and nail salons are again off-limits in most of the state, Gov. Gavin Newsom said Monday in issuing a sweeping set of closure...