Opening a Security Council debate on how to protect civilians caught up in urban conflict,the UN Secretary-General on Tuesday said that more than 50 million people are currently impacted by fighting inside towns and cities.

In fact, António Guterres added, w hen explosive weapons are used in populated areas, around 90 per cent of those killed and injured, play no part in instigating the violence.

“Civilians can suffer devastating harm both in the immediate aftermath, and in the long-term”, the UN chief explained.

According to him, many victims face lifelong disabilities and grave psychological trauma. Water, electricity and sanitation infrastructure are often damaged, and healthcare services are severely disrupted. 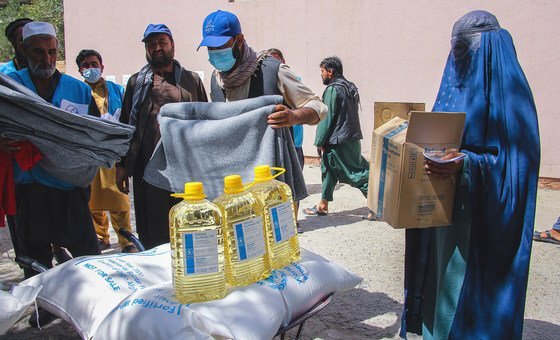 Food and blankets are handed out to people in need in Kabul, the capital of Afghanistan, by © WFP/Arete

The Secretary-General chief then mentioned some examples.

Pointing to scores of schools and healthcare facilities damaged during fighting between Israel and Hamas militants in Gaza last year, he remembered that nearly 800,000 people were left without access to piped water.

In Afghanistan, an explosive attack outside a Kabul high school last May, killed 90 students, mainly girls, and left another 240 people injured.

“Beyond the immediate pain and suffering, the indirect effects of damage to schools range from disruption to education, to increased likelihood of early marriage and recruitment into armed groups”, Mr. Guterres said.

According to a 2020 study conducted in Yemen, the use of heavy explosive weapons in populated areas disrupted every resource and system in the country.

“From Afghanistan to Libya, Syria, Yemen and beyond, the risk of harm to civilians, rises when combatants move among them and put military facilities and equipment near civilian infrastructure”, the UN chief said.

The consequences of this type of conflict go far beyond its more immediate impact, putting people at risk of sieges and blockades, which have had a horrific impact on civilians in growing urban areas, up to and including starvation.

Four years after the destruction of 80 per cent of housing in Mosul, Iraq, for example, an estimated 300,000 people are still displaced.

Warfare in cities also creates millions of tons of debris that poses risks to both the environment and to people’s health. And unexploded ordnance makes it too dangerous for people to return home.

On top of that, mass destruction of buildings sets development back by decades, undermining progress towards the Sustainable Development Goals.

Mr. Guterres told Council Members that “the frightening human cost of waging war in cities is not inevitable; it is a choice.”

He then shared some measures that could help prevent and mitigate its impact.

First, regarding international humanitarian law, he noted that recent years have seen increasing concern over compliance with these laws.

He stated that “accountability for serious violations is essential” and argued that Member States must demonstrate the political will to investigate and prosecute alleged war crimes to the maximum extent.

“We owe that to the victims and their loved ones – and it is also crucial to serve as a powerful deterrent”, he explained. 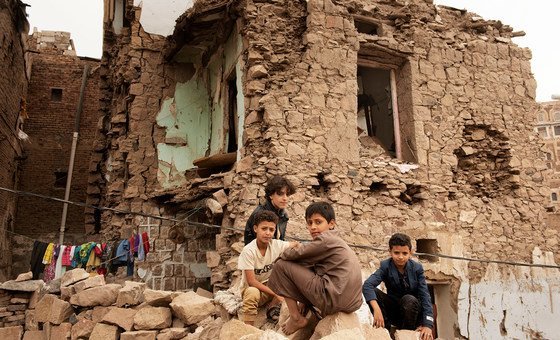 Children sit in front of a house damaged by an air strike, inside the old city of Sana'a, Yemen. (file), by © UNICEF/Alessio Romenzi

Second, the Secretary-General explained, parties to conflict have options when waging war.

“They should adapt their choice of weapons and tactics when they wage war in cities, recognizing that they cannot fight in populated areas the way they would in open battlefields”, Mr. Guterres said, urging Member States to commit themselves to avoiding the use of wide-area explosive weapons in populated areas.

Third, and lastly, Mr. Guterres made the case for better policies and practices, including more systematic tracking ofalleged incidents in cities and towns.

The UN chief believes this type of analysis can inform a more responsible approach to arms sales, and help clarify the fate of missing people, inform ways to minimize civilian harm, and ensure accountability, recovery and reconciliation.

The President of the International Committee of the Red Cross, one of the main organizations on the frontline of the humanitarian response to urban warfare, also addressed the council.

Noting that “wars are changing at a fast pace”, Mr. Maurer argued that the international community is “struggling to keep up our efforts to prevent and respond to their humanitarian impacts.”

“This is experienced most severely by people trapped in urban warfare. We can and must do more, for the sake of generations present and future”, he told ambassadors in the Council chamber.

EXPLAINER-How concerned should we be about monkeypox?