Today's Google doodle honors Jewish German-Dutch diarist and Holocaust victim Anne Fran (Annelies Marie Frank). Today's Doodle features original excerpts from her journal, in which she describes what she and her friends and family experienced during their two-year stay in hiding. Today marks the 75th anniversary of the publication of her diary, widely considered one of the most important books in modern history.

Although Anne Frank only wrote her diary when she was 13 to 15 years old, her personal accounts of the Holocaust and the events of the war remain some of the most poignant and widely read documentaries to date.

Anne Frank was born on June 12, 1929 in Frankfurt am Main, but she moved to Amsterdam with her family in 1933. Anne's family fled the growing National Socialist Party and its discrimination and violence against millions of minorities. When Anne was 10 years old, World War II broke out and shortly afterwards Germany invaded the Netherlands, bringing the war to Anne's family's doorstep. The National Socialists now also began to persecute Jews in the Netherlands and had them executed or deported to concentration camps. No longer able to live freely and safely, millions of Jews were forced to flee their homes or go into hiding.

Like millions of others, the Frank family was forced to act quickly, leaving almost everything they owned to seek shelter. Among Anne's few remaining possessions was a small gift she'd received for her thirteenth birthday just a few weeks earlier: a hardcover, checkered notebook. It soon became her personal tool to change the world forever.

Over the next 25 months, she filled the pages with candid accounts of her life as a teenage girl in the "secret annex," from the small details to her deepest dreams and fears. Anne's writing made a deep impression on Otto. He read that Anne had wanted to become a writer or a journalist and that she had intended to publish her stories about life in the Secret Annex. Friends convinced Otto to publish the diary and in June 1947, 3,000 copies of Het Achterhuis (The Secret Annex) were printed.

On August 4, 1944, the Frank family was discovered by the National Socialist secret service, arrested and taken to an internment camp, where they were forced to do forced labor. They were then deported to the Auschwitz concentration camp in Poland, where they lived in extremely difficult conditions and in a cramped space. A few months later, Anne and Margot Frank were transported to the Bergen-Belsen concentration camp in Germany. In addition to the brutal execution of prisoners by the Nazis, deadly diseases spread rapidly through the camps. Eventually, Anne and Margot succumbed to the inhumane conditions in which they were forced to live. Anne Frank was just 15 years old. 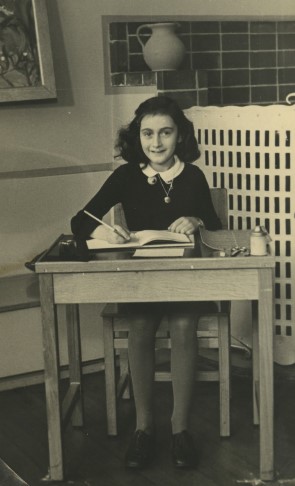 Although Anne Frank did not survive the horrors of the Holocaust, her account of those years, known worldwide as "The Diary of Anne Frank," has become one of the most widely read non-fiction books ever published. Translated into more than 80 languages, Anne's historical documentaries are now a staple in classrooms, educating generations of children about the Holocaust and the terrible dangers of discrimination and violence.

All her book was later translated into around 70 languages and adapted for stage and screen. People all over the world were introduced to Anne's story and in 1960 the hiding place became a museum: the Anne Frank House. Until his death in 1980, Otto remained closely involved with the Anne Frank House and the museum: he hoped that readers of the diary would become aware of the dangers of discrimination, racism, and hatred of Jews.

Thank you Anne Frank for giving us this compelling insight into your experiences and our past together, but also the unshakable hope for our future.