Redmi 8 India launch today at 11 am: What to expect?

The device will be likely powered by octa-core Qualcomm Snapdragon 439 mobile platform based on 12 nm FinFET process technology and Adreno 505 GPU.

Chinese phone maker and India's leading smartphone brand Xiaomi is all set to launch the Redmi 8 in the country. According to the official teaser poster, the affordable smartphone will come with an Aura Mirror design, vertically aligned dual-rear cameras with flagship Sony sensor, multitasking capability, and will be equipped with a high-capacity battery, that will be more than 4000mAh with Fast Charging support.

The phone will come with industry-leading edge detection technology, scratch-resistance and splash resistance display and ultimate screen protection, according to the teaser poster.

Last week, the Redmi 8 was spotted on Google Play Console listing by 91Mobiles, according to which, the device will feature a 6.21-inch HD+ water-drop display with 720 x 1520-pixels resolution at 320ppi.

#Redmi8 is powered by the very best to give you seamless experience with built-to-last hardware.#Redmi8 arriving tomorrow.Know More: https://t.co/nsALpVdb13Are you ready for some #BatteryCameraAction pic.twitter.com/MeD8M9rJ2n

The device will be likely powered by octa-core Qualcomm Snapdragon 439 mobile platform based on 12 nm FinFET process technology and Adreno 505 GPU coupled with up to 4GB RAM and 64GB onboard storage and will run on Android 9 Pie with custom MIUI 10 skin on top.

The Redmi 8 will also incorporate a rear-mounted fingerprint scanner and a dedicated microSD card slot for storage expansion up to 512GB. On the optics front, the Redmi 8 will house a dual-rear camera module that comprises of a 12-megapixel primary lens and a 2-megapixel depth sensor while on the front, it will feature an 8-megapixel selfie camera with f/2.0 aperture. 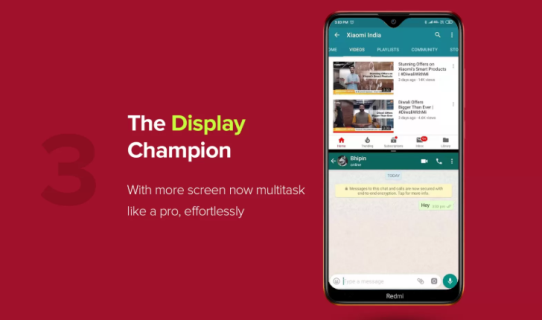 The budget-centric smartphone is rumored to come in four color options, namely, Red, Green, Blue, and Black and will likely be priced under Rs 10,000 in India.

Three youth from Bandipora district of Jammu and Kashmir were on Friday prevented from joining the militant ranks, police saidThe three youths from Sumbal area of the north Kashmir district were prevented from taking the violent path, a pol...

The global death toll from COVID-19 could double to 2 million before a successful vaccine is widely used and could be even higher without concerted action to curb the pandemic, an official at the World Health Organization said on Friday.Unl...

Don't read headlines, hear what I said: Gavaskar on remark on Virat Kohli

Former India cricketer Sunil Gavaskar on Friday said he has not given any sexiest comment on Indian skipper Virat Kohlis wife Anushka Sharma and added that people should carefully listen what he said on Kohli rather than reading the headlin...