IIT Delhi has recently launched an initiative – Globalization of IIT Delhi – with a vision to improve its global ranking. The Director, Prof. V. Ramgopal Rao is hopeful that within five years the institute would be among the top 100 institutions of the world. Besides, it will also open several developmental avenues. Read the full interview and view the video.

Getting admission in any Indian Institute of Technology is a dream for many. These institutes are hailed as the best in India and so attract the best brains. Every year, the multi-national companies from across the world including those in the USA and European countries come here for campus placements. Why are IITs' not among the top 100 institutions of the world? This question pains IITians and also every Indian. IIT Delhi has recently launched an initiative – Globalization of IIT Delhi. The initiative is under the mandate of Institute of Eminence (IoE) scheme of the University Grants Commission for which six institutions, three each from public and private sector, were selected in the first phase in July 2018 from 114 top institutions of India. IIT Delhi is first amongst the three public institutions, others are IIT Mumbai and Indian Institute of Science (IISc), Bengaluru.

Siddheshwar Shukla, Associate Editor with Devdiscourse catches up with IIT Delhi Director Prof. V. Ramgopal Rao and the Dean, Alumni Affairs and International Programs, Prof. Sanjeev Sanghi for a conversation on the challenges and opportunities of the initiative. The Edited Excerpts:

Siddheshwar Shukla: What is the vision behind 'Globalization of IIT Delhi'?

Prof. V. Ramgopal Rao: Now everybody is asking, why Indian universities and academic institutes are not among the top 100 of the world ranking. This is because, in the three out of the six parameters of global raking criteria, we are awarded zero marks. These three are – foreign faculty, foreign students and faculty to student ratio. Unless the faculty students' ratio is 1: 4 or 1:5, it's very difficult to be in the top 50 on the global ranking.

On all these parameters, IITs are not doing well. Being the Government of India institutes, we never had the autonomy to offer faculty positions to the foreigners.

In fact, until two years ago, we even had a rule that the foreign students in IITs were charged a fee equal to the universities in the USA. As the students' strength was gradually increased, which is presently about 10,500, we are facing problems in maintaining faculty to student ratio. There are not enough eligible Ph.D. holders in India who could be hired as faculty. Therefore, if we ever want to see any of the Indian universities or institutions to be in the top 100 global rankings, we will have to open our education system for the world – encourage foreign students to get admissions and open faculty positions for foreigners.

S. Shukla: So, is the main idea to improve the global ranking?

Prof. Rao: The day we are in the top 100, India will be proud of these institutions. Secondly, worldwide several countries rank below India in terms of GDP and other social and economic criteria. The technologies developed by IIT Delhi for Indian farmers could also be used in Bangladesh, Africa or any other country.

Now, our students need to have a global outlook. The technologies may be local but the science is global. Therefore, the technology we develop for local farmers can be tailor-made or modified for the farmers of Africa, Bangladesh or any other part of the world. If the students are provided such exposure, they will develop the global outlook. Thus we will have some startups and companies with a global outlook. In this way, besides fulfilling developmental requirements of India, the IIT Delhi will play a positive role in the sustainable development of those countries.

Prof. Sanjeev Sanghi: Besides, in today's global era we do realize that it is good to have cultural diversity on the campus. We would like to have more foreign students because they learn about our culture and our students learn their culture when they study here. So, with that viewpoint, we would like our campuses to be more diverse.

S. Shukla: What is the current extent of global students in IIT Delhi?

Prof. Sanghi: Currently, 150 out of about 10,000 students on the campus are of non-Indian origin. 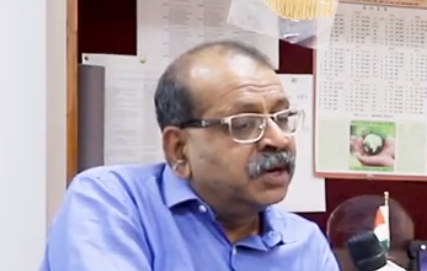 S. Shukla: Which countries or continents are sending maximum students to IIT Delhi?

S. Shukla: Which countries or continents, according to you, have the scope of sending more students to IIT Delhi?

Prof. Sanghi: Besides Asian and African countries, we have good potential from South East Asia and Middle East countries. In addition to that, regions like Latin America, where we think we can get a lot of students but we have not exploited them fully. And the second region is Eastern Europe. But language is a major constraint in these two regions. Recently, we launched a student exchange program with the University of Queensland in Australia.

S. Shukla: What are the special features of the initiative - Globalization of IIT Delhi?

S. Shukla: IIT Delhi recently organized a summit on 'Globalization of IIT Delhi'. How much such summits are useful for this initiative?

Prof Rao: We wanted to make use of the ambassadors of the embassies and consulates in India to reach out to the universities in their countries. In the summit, we invited ambassadors of many of these countries and presented our detailed project before them. This is working. I am getting messages and updates from several ambassadors. We are also working on proposals to launch joint Ph.D. supervision programs with several foreign universities. Besides, Egypt has offered us to set up a campus of IIT Delhi.

Prof. Sanghi: As we said, we have started many initiatives, these initiatives need to be communicated to the students around the world. They should know – there exists a place IIT Delhi where they can get an excellent education. We want to get the best students from all over the world. As an analogy, I would like to say, in our times the best students used to go to the USA. What we are trying is - to get the best foreign students in IIT Delhi who due to any constraints are not able to go to the USA. Our faculty teams are going to some of these countries, for example, a team went to Malaysia and they gave presentations at about half a dozen universities. The faculty teams were also sent to Nepal, Bangladesh and other countries as well.

Shukla: With 'Globalization of IIT Delhi' where do you want to see the IIT Delhi in next five years?

Prof. Rao: We want to make it in the top hundred institutions of the world. That is our goal but it's also a challenge because there are many things that need to happen. As about 50% of those parameters are devoted to perception - what others think about us. We are trying to reach out societies, tell them about the achievements of IIT Delhi and connect better with the societal problems.

For instance, if you go to a place and see any IIT Delhi-developed technology that solved a problem in the community. It makes a perception about us. Thus people get to know about IIT Delhi and that is how their perceptions can change over a period of time. We are doing everything possible. We want to be counted among the top hundred institutions in the world in the next five years on any parameter that you want to measure or on any kind of a perception based ranking system.