Scary predictions on the rate of spread of COVID 19 infections in India are floating in media. But the data on the spread of infections coming so far point to a contrary trajectory putting a question mark on such predictions. Explanations on this disconnect among predictions and the actual number of infections so far are numerous ranging from the under testing of possible infections to empirical and statistical prudence of forecast models. Read the full report...

COVID 19 seems to have united the world on several grounds. However, the question of whether the outbreak will decrease or remain the same in higher environmental temperature has divided even the science community. Amid the arguments and counter-arguments from both the sides, a couple of new researches are showing the optimistic picture.

"You can catch COVID-19, no matter how sunny or hot the weather is. Countries with hot weather have reported cases of COVID-19," this statement of the World Health Organization (WHO) may be valid for individual infections but says nothing conclusively on the trend of the outbreak in countries with high temperatures. There are various claims and counterclaims on the correlation between environmental temperature and the rate of spread of COVID 19 infections being disseminated through mainstream and social media.

The COVID 19 virus primarily spreads through droplets released from the infected person(s) during coughing and sneezing. All those coming in direct contact of such droplets released by the infected persons or touching infected objects will be infected. According to a study, the virus survives from 24 hours to 72 hours on various kinds of surfaces. Although, the high temperature may not kill the virus but expedite its neutralization process. "For items that are hard to clean, sunshine may be valuable. Leave your shoes outside, soles up, in the sun. Coronaviruses begin degrading quickly in temperatures higher than 56 degrees Celsius, and in direct UV light," said an analysis published by World Economic Forum.

A recent publication of WHO titled 'Water, Sanitation, Hygiene and Waste Management for the COVID 19 Virus' said, "It is not certain how long the virus that causes COVID-19 survives on surfaces, but it seems likely to behave like other coronaviruses. A recent review of the survival of human coronaviruses on surfaces found large variability, ranging from 2 hours to 9 days. The survival time depends on a number of factors, including the type of surface, temperature, relative humidity, and a specific strain of the virus. The same review also found that effective inactivation could be achieved within 1 minute using common disinfectants, such as 70 percent ethanol or sodium hypochlorite,".

Highlighting the importance of temperature in expediting die off the virus, the publication said, "Machine washing with warm water at 60-90°C (140-194°F) with laundry detergent is recommended. The laundry can then be dried according to routine procedures. If machine washing is not possible, linens can be soaked in hot water and soap in a large drum using a stick to stir and being careful to avoid splashing." The average temperature of the day is not about sudden rise and fall in temperature but it persists for hours from the afternoon till the evening. Several cities in the Indian sub-continent face intense sunlight from 11 am to 6 pm in summers. This much exposure to intense sunlight is likely to push the surface temperature of the objects beyond 60 degrees for longer duration acting as a natural disinfectant. However, the air-conditioned environment such as shopping malls, metros, air-conditioned busses, trains, and flights may be a safe zone for COVID 19.

Although not specifically related to COVID 19, another study by Anice C. Lowen and John Steel published in Journal of Virology in July 2014 concludes that epidemiological analyses, spurred by experimental data on influenza virus transmission and stability, have identified absolute humidity and temperature as climatic predictors of influenza epidemics in temperate regions of the world. A number of epidemiological studies have followed up on these findings and revealed robust associations between influenza incidence in temperate regions and local conditions of humidity and temperature, offering a long-awaited explanation for the wintertime seasonality of influenza in these locales. "Transmission experiments using the guinea pig model indicate that the association between these environmental factors and influenza seasonality is due to their impact on the efficiency of respiratory droplet transmission," said the study. Although the researches to assess the peculiarities of COVID 19 and other influenza viruses are in progress, the two types of viruses have symptomatic and transmission specific similarities. In view of such similarities and findings of this study, it becomes pertinent to explore the hypothesis whether the summer temperatures in India and few other countries will slow down the spread of COVID 19 infections.

The results of controlled experiments to test the above hypothesis will take some time to come out. However, VisionRI, conducted a quick empirical study through a comparative analysis of the trend of COVID 19 outbreak and the average temperatures in 24 selected cities of the world from January 27 to March 30. The data on COVID 19 cases and average daily temperatures were analysed to find out the correlation between them if any. In our quest to make the sample representative enough, we selected cities from across continents falling in different temperature zones.

The sampled cities can easily be put into two groups. Group-1 is comprised of cities having average daily temperatures in the range of about 15 degrees Celsius to 34 degrees Celsius. A plot of cumulative infections in these cities indicates the number of infections in the last 30 days of study period has increased from a single-digit number to a few hundred. In Delhi, the first two cases of COVID 19 infection were detected on 4th March and this number increased to 92 on 30th March. In Sydney, the first case of COVID 19 infection was detected on 29th January and this number increased to 470 on 30th March.

Some researchers and media cite the low rate of testing for infection in Group-1 countries behind the visible slow spread of COVID 19 infections. However, the low numbers of tests hiding the higher number of infections in these countries might have manifested in a higher number of cases reported to OPDs in hospitals and maybe the number of deaths by now which has not happened as such when compared to Group-2 countries. 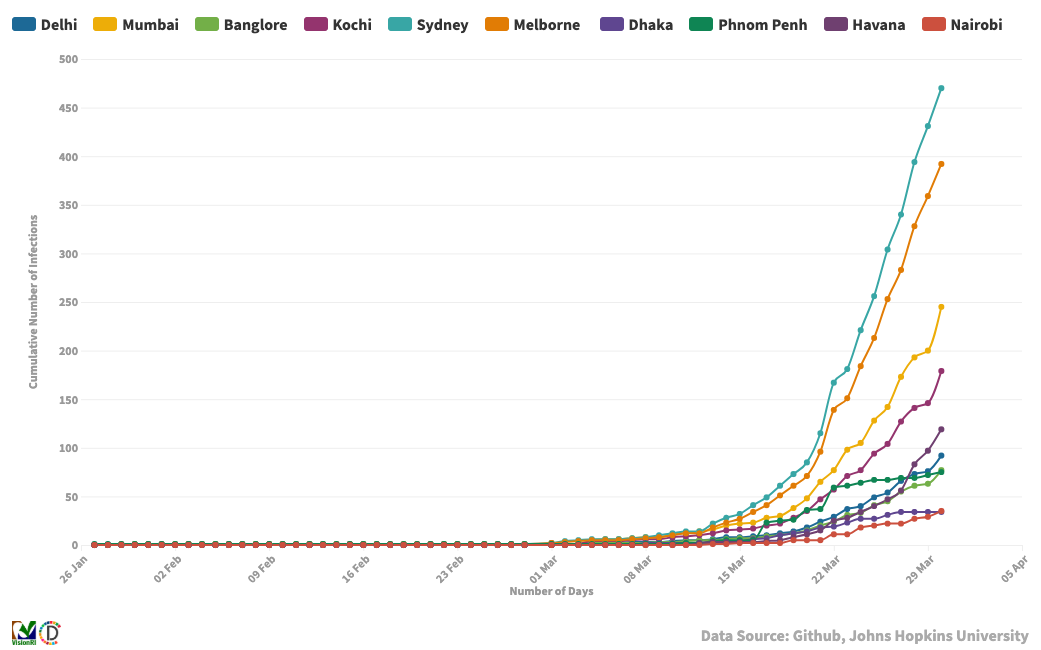 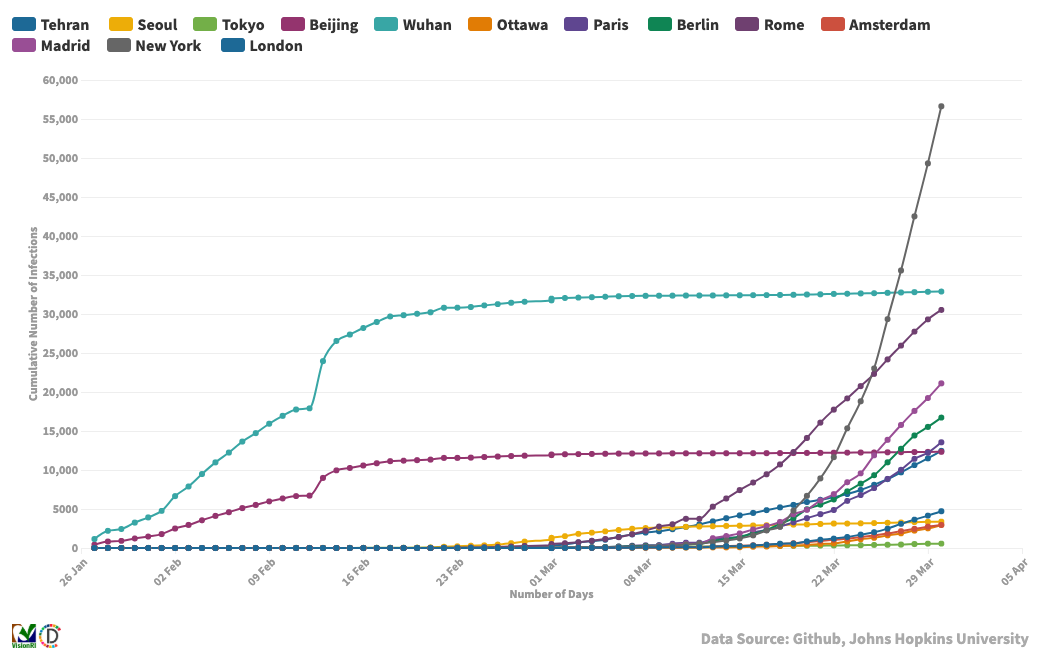 In high temperatures such as Indian summer, the number of droplets released by an infected person is likely to be less in comparison to low environmental temperature. Furthermore, these droplets may dry faster in the hot and dry atmosphere making it less contagious. Although, the high temperature may not kill the virus but expedite its neutralization process. Furthermore, the direct sunlight will also reduce the life of COVID 19, said a study published by the National Institute of Health, USA.

Indian cities falling in different temperature zones are showing different rates of the spread of infection. However, given the high population density, the rate of infection is comparatively slow in comparison to cities/ countries of Europe. The high number of cases in Indian cities of Mumbai (Maharashtra), Chennai (Tamil Nadu) and Kochi (Kerala) is reportedly due to imported infections. These cities are in high-temperature zones. What would have been the situation if these cities of India were in the temperature range of European cities? Any such prediction will require a comprehensive comparative multi-disciplinary analysis.

Therefore, we can safely predict that the rate of infection will be lower in cities/ states/ countries gradually moving towards high temperatures and the summer season.

However, the temperature is not the sole factor in deciding the rate of the outbreak of COVID 19 but minimizing contact with the infected person/s seems crucial. The cities/countries falling in low-temperature zones but strictly enforcing lockdown measures at an appropriate time have succeeded in slowing down the rate of COVID 19 outbreaks. Furthermore, the low rate of infection doesn't mean everybody is safe from the virus. Therefore, even after the rise in temperature, the measures of social distancing, frequent handwashing, personal hygiene, and immunity-boosting preventive healthcare are required to slowdown COVID 19 outbreak. The preventive measures are of utmost importance for individual protection until any effective treatment and/ or vaccine is made available in the market. Further, the shutdown of cities and countries are rightly justified to counter the imported spread of infections and seeing that some of the low-temperature countries as well, particularly China, have successfully countered the spread of infection by doing so.

Though the empirical study by VisionRI read along with previous studies indicates that high temperature acts as a barrier for COVID 19 infection, there is no indication of the complete eradication of COVID 19 in high temperature. This is probably due to two main reasons – firstly, the human body maintains its temperature as about 37 degrees Celsius, therefore, the virus will not die inside the human body and secondly, even in the case of highest temperature in any city/ region, there will always be air-conditioned places and several other low-temperature areas. Though cases are low and mortality is lower in high-temperature cities but the COVID 19 is present and slowly spreading.

Furthermore, there will always be chances of imported transmission of the virus. The crux is that one should not get panicked by doomsayers but stay careful.

Pirates of the Caribbean 6: Is Johnny Depp’s returning confirmed? Know what producer says on it

The changes indicate that the tech industry is moving towards a paradigm shift over how it operates and, more importantly, how it is regulated....

In a world that, all of sudden, has turned virtual, it has become absolutely essential to providing equal digital access and opportunities to the unconnected population, primarily dominated by women. ...

However, the death rate of women due to COVID 19 infection is less than men, the repercussions of worldwide lockdown have adversely affected women across communities and economic sectors throughout the globe. The experts fear that the pande...

A central expenditure audit team has detected a fraud of Rs 57 lakh by over 100 JNU officials in claiming leave travel concession and reimbursement of phone bills during fiscal 2017-18. On a communication by the office of Director General o...

Brazilian President Jair Bolsonaro has failed in managing the coronavirus crisis, teenage climate activist Greta Thunberg said on Friday, a day after a record rise in deaths in the South American nation.The Bolsonaro government has definite...

The Supreme Court on Friday sought response from the Centre on a PIL seeking capping of treatment cost of COVID-19 patients in private hospitals in the country. A bench headed by Justice Ashok Bhushan issued notice to the Centre on the PIL ...

WeWork co-founder Miguel McKelvey will leave the office space-sharing firm at the end of June, a company spokesman said on Friday.After 10 years, Ive made one of the most difficult decisions of my life ... at the end of this month, Ill be l...