Consisting of a full marathon, a half marathon, and a 7km race, Xi'an Yango International Marathon (The event) will begin at 7:30, October 20, 2019. The event will establish an interactive platform for both professionals and city residents to enhance their physical health and raise awareness of sport across the city. 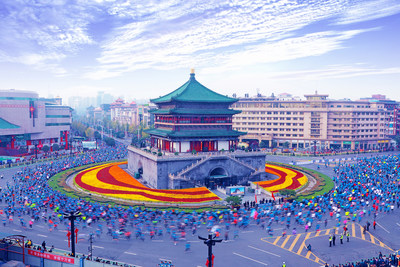 "We are thrilled to see so many runners gathering at Xi'an to join this fantastic event," said Xiao'an Qiang, Deputy Executive Secretary-General of Yango Marathon Committee and Deputy Mayor of Xi'an, "As one of the most popular marathon competitions in China, we have welcomed 30,000 runners from 30 countries and regions in 2018. Taking this opportunity, we would like to introduce the city of Xi'an to visitors and the world, through the exchange of culture and sports."

Establishing a partnership with the Thailand Bangkok Marathon Organizing Committee, The event will welcome ten runners from Thailand. Also, participants of the Xi'an marathon have the opportunity to get a direct entry qualification to the Bangkok Marathon.

Now in its third year, the event will entertain its competitors with a combination of historical tourist destinations and modern landscapes. Full marathon runners will start at Yong Nong Gate, the south gate of the ancient Xi'an city, and will pass views such as the Bell Tower, the Big Wild Goose Pagoda and Xi'an Jiaotong University, before reaching the finishing line at Daming Palace National Heritage Park.

The awareness of the sport will be raised further by a series of satellite competitions, including a half marathon around universities, an off-road challenge in Qinling and city running events throughout the year.

Registration for the event now opens on the official website www.xian42195.com.

The capital of China's western Shaanxi province, Xi'an is an international tourist destination with over 3,000 years of history and world-renowned attractions such as the Terracotta Warriors and Horses and its ancient City Wall. The city, dubbed "China's outdoor museum," was the starting point of the Silk Road, an old network of trade routes established during China's Han Dynasty that linked the East and the West in commerce.

Democratic presidential nominee Joe Biden on Wednesday said Black turnout was the linchpin to his hopes of winning the White House in November and reversing economic and social inequities that have held back African Americans.Noting that th...

COLUMN-How Dems could curb a conservative SCOTUS without court-packing: Frankel

President Donald Trump and Republicans in the U.S. Senate are barreling forward with plans to lock down conservative control of the U.S. Supreme Court for decades to come. The president has said he will announce his nominee on Saturday to f...

Pompeo warns U.S. politicians to be alert to Chinese 'influence and espionage'

U.S. Secretary of State Mike Pompeo on Wednesday warned U.S. politicians at the state and local level to be vigilant around Chinese diplomats who he said could be trying to woo them as part of Beijings propaganda and espionage campaign. Spe...