Analyzing Human Development Report 2019 with a special focus on India

The constructive voices in support of indexes that view human development beyond the prism of income are as old as the birth of GDP. Human Development Index (HDI) by UNDP is one such proxy used for measuring a country's overall achievement in its social and economic dimensions based on the health of people, their level of education and their standard of living.

In the last five years (between 2013 to 2018), Ireland has recorded the highest jump in its HDI rank (13 places up) followed by Thailand and the Dominican Republic, by 12 and 10 places respectively. During the same period, Venezuela has reported the highest downfall in HDI ranking (26 places down) followed by Yemen and the Syrian Arab Republic by 18 and 14 places respectively.

The global HDI value is consistently rising since 1990. Its value is 2018 as reflected in the 2019 report was 0.731, 21.7 percent compared to 0.598 in 1990. Across the world, the living standard, life span, and education level of the human being are rising significantly. Now the average life span is 7 years more than what it was in 1990 and more than 130 countries have universal enrolment in primary education.

This year's report was titled "Beyond income, beyond averages, beyond today: Inequalities in human development in the 21st century". The report focused on how inequality has a reparation effect on many personal and social aspects. It has a deep-rooted impact on education, health, access to technology and many more aspects of human development.

Hence when there is inequality in income, society, education, health, etc, it has a significant effect in aggregate HDI value of a country. The average overall loss when HDI value is adjusted to inequality is about 20 percent. Losses range from 3.6 percent in Japan to 45.3 percent in Comoros.

India's status in HDI since the inception of the Human Development Index: 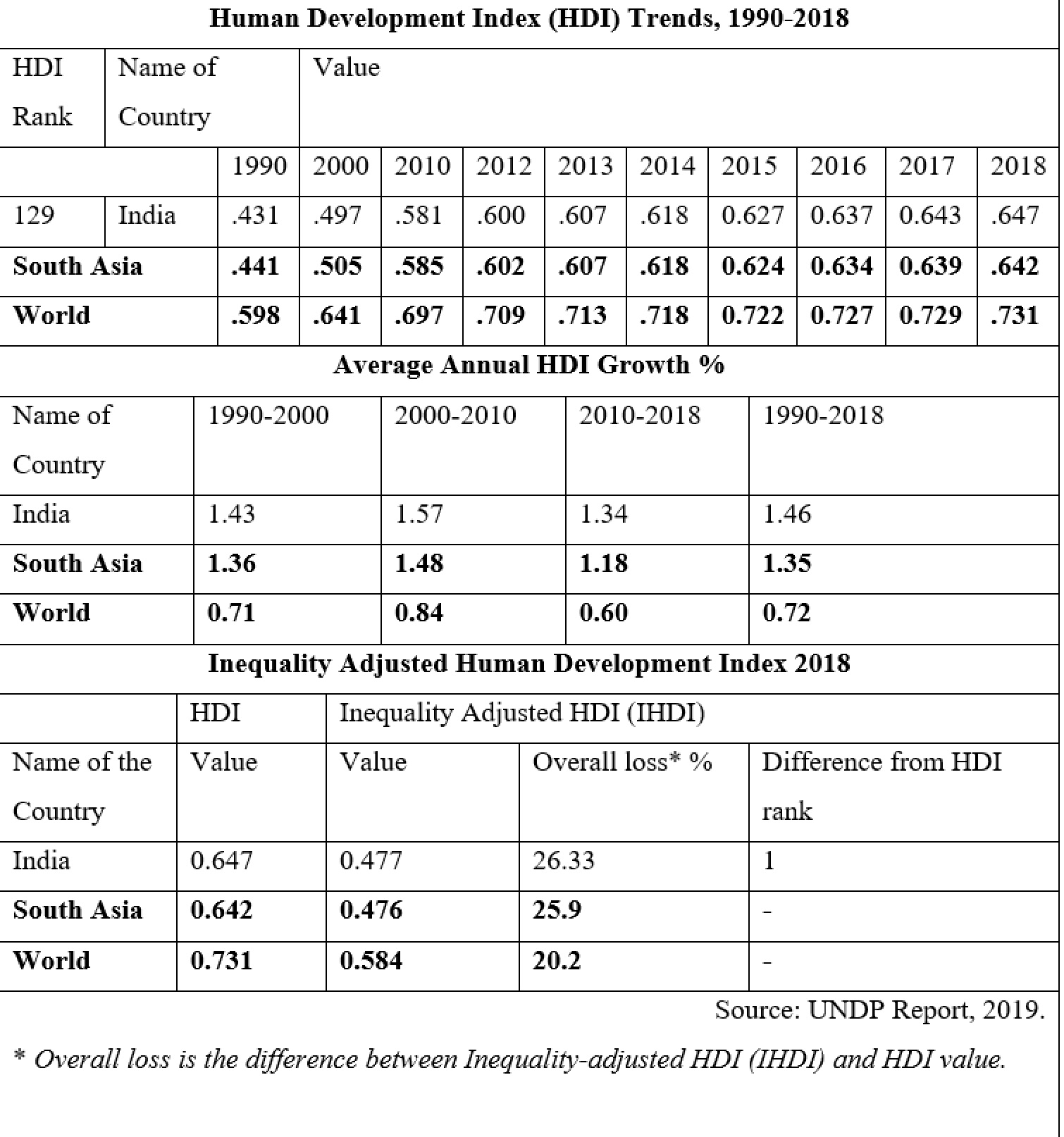 As compared to the 2018 HDI report, India has moved one place above in its ranking and for the last five years, its HDI score has been more than the average score of South Asia but lower than the world average. The average annual HDI growth of India is also more than in South Asia and the World.

For enlarging the choices of people of India, the government should invest more in education, health, infrastructure and other areas that make human life better. Ensuring quality along with quantity is also equally important in this technological and innovation-driven third decade of the 21st century. Thus the government needs to shift its approaches beyond GDP-centric policies and take steps that ensure good quality of life of people.

Since HDI was created 3 decades ago, UNDP has not deviated from its focused agendas of seeing a well-off and happy society across the world.

The development process of a country can create an inductive environment for people's choices which might further lead to people's happiness. This is originally Amartya Sen's capability-approach of human well-being which UNDP adopted to monitor human development.

The very first report broadly defined human development as "the process of enlarging people's choices. The most critical of these wide ranges- ranging choices are to live a long and healthy life, to be educated, and to have access to resources needed for a decent standard of living. Additional choices include political freedom, guaranteed human rights and personal self-respect''. The inaugural report also noted that development enables people to have these choices. Questions like "do they (people) have the capability to live long? Can they avoid mortality during infancy and childhood? Can they escape preventable morbidity? Do they avoid illiteracy? Are they free from hunger and undernourishment? Do they enjoy personal liberty and freedom?" were primarily used to develop HDI.

Mahbub Ul Haq, another prominent architect of HDI, in 1995, wrote that HDI followed six basic principles as guidelines that are to; (i) measure the basic purpose of human development- to enlarge people`s choice; (ii) include a limited number of variables to keep it simple and manageable; (iii) be composite rather than plethora of separate indices; (iv) cover both social and economic choices; (v) be enough flexible in methodology to incorporate, once better alternatives available; (vi) not be too inhibited by lack of reliable and up-to-date data series.

To capture these three dimensions, four indicators are used:

The performance in each dimension is measured in a value between 0 and 1, by applying the general formula; Dimensions Index = Actual Value – Minimum Target Value / Maximum target value – minimum target value. HDI is then calculated as a single average of the dimension's indices.

HC notice to Centre on stranded Indians in Malaysia

Cargo shipping is a crucial part of the global supply chains and is likely to become more resilient along with efforts to make supply chains resilient but cruise liners could face much more disruptive changes....

Magic Johnson hopeful NBA can crown a champion despite Covid-19

Magic Johnson says if the NBA does resume this season it will be without fans and the players shouldnt have any trouble adjusting on the fly to playing in empty stadiums. The former NBA legend and part owner of the Los Angeles Dodgers baseb...

Tokyo will ask a range of businesses to close during a month-long emergency to fight the new coronavirus, the governor of the Japanese capital said on Friday, as the ancient capital Kyoto warned of spreading contagion and urged tourists to ...