Mi Band 5 may launch in India next month; identical product listed on Amazon

Days after its launch in China, the band was launched in international markets followed by the Indian market in September 2019. So, going by the previous trends, the Xiaomi Mi Band 5 is expected to arrive in India in September 2020.

More than three months after the launch of Xiaomi Mi Band 5 in China and other global markets, there is no official word on the pricing and availability of the fitness band in India yet.

If we look at the past launch schedules, the Mi Band 4, the predecessor of Mi Band 5 was launched in June 2019 in China. Days after its launch in China, the band was launched in international markets followed by the Indian market in September 2019. So, going by the previous trends, the Xiaomi Mi Band 5 is likely to arrive in India in September 2020.

It is noteworthy to mention that the product was earlier spotted on the Bureau of Indian Standards (BIS) website with the model number 'XMSH10HM'.

Even though the release date has not yet been confirmed by the company, an identical product without NFC or SpO2 sensor (as in the global version of the fitness band) is already listed on Amazon India as Mijia Mi Band 5. Only the black color variant of the band has been listed by the seller and is priced at Rs 4,749 which is almost double the expected price of Rs 2,499 in India. The image descriptions on the product listing page clearly say that it is Xiaomi Mi Band 5.

However, we cannot assure as to whether the listed product is real or fake. Whatever the case may be, it's better to wait a little more for the official launch as it is said 'the longer the wait the sweeter the fruit'. 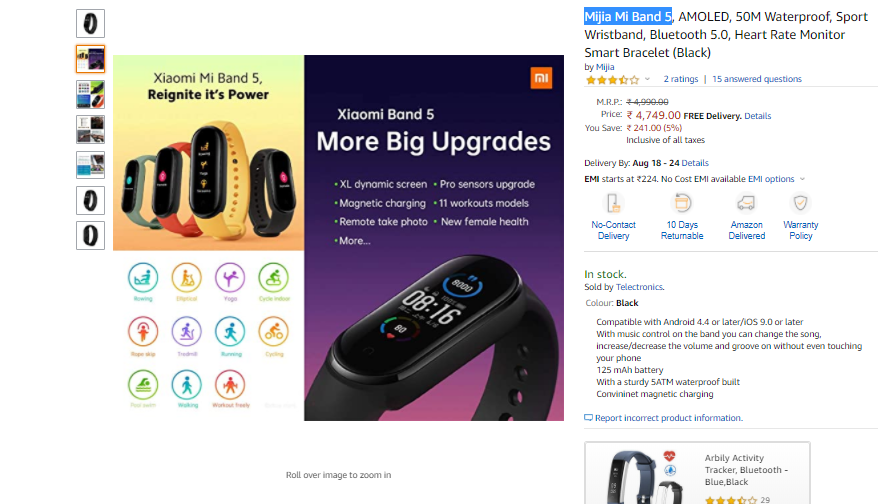 Notable features on the Mi Band 5 include:

Report: Vikings to bring in LB Davis for visit

The Minnesota Vikings plan to bring in linebacker Todd Davis for a visit once the ex-Denver Broncos player clears COVID-19 testing protocols, Mike Klis of 9News reported Tuesday. The Vikings lost Anthony Barr pectoral for the season in Sund...

The mother of a British man who is suspected in the beheadings of Westerners taken hostage by the Islamic State group lost a court challenge on Tuesday to the British governments decision to share evidence about her son with American author...

In his centrepiece address to the historic and unprecedented 75th session of the UN General Assembly, Secretary-General Antnio Guterres on Tuesday appealed for global solidarity to overcome the COVID-19, and again call for a global ceasefir...

The U.S. House of Representatives put on hold an expected Tuesday vote on a bill to fund the government through Dec. 11, while bipartisan congressional leaders discussed whether to include farm aid sought by President Donald Trump, lawmaker...