Lack of gender equality not only imperils women's access to resources and opportunities but also imperils the life prospects of the future generation. Regardless of one's socioeconomic group, there are systematic gender differences in material well-being, although the gradation mark for the inequality diversifies across countries and over time. Over the last two decades, the goal of reducing gender inequality has held a note-worthy place in international organizations and in national strategy statements.

Gender equality is accentuated by its inclusion in the 17 Sustainable Development Goals (SDGs). SDG 5 reflects the global attention to the issue of gender inequality and has been providing the impetus for governments to eliminate gender inequality. To make SDG 5 achievable for all Indian States by 2030, the Indian government has implemented a number of policies and programs notably including 'Beti Bachao Beti Padhao', 'Pradhan Mantri Matritva Vandana Yojana' and the Maternity Benefit Act. Considering the multifaceted nature of the problem, NITI Aayog in its 'Strategy for New India @ 75' document proposed to institute a dedicated unit under Women and Child Development Ministry to monitor the progress of gender-related targets across the States and ministries.

McKinsey Global Institute (MGI) in its 2018 report "Gender Role in Economic Growth; Power of Parity" has made a certain shocking observation. It has established a very strong link between Gender Equality in Work and in Society. More importantly, gender equality in work is not achieved without gender equality in society. The unequal society has a scathing attack on Social Fabric and Community Capital, which has a reparation effect on the overall Well-Being of the people. And when we talk about well-being there is a growing recognition that it is a multi-dimensional concept, and goes beyond income, educational attainment, and health, to include agency and empowerment as well as subjective well-being- these all are of intrinsic value and it generates the preconditions for securing one's economic well-being via engagement in production and economic decision-making. In the global report of MGI in Sep. 2015, it has been reported how advancing women`s equality can add $12 trillion to global growth.

Based on these broader variables the data is like this- 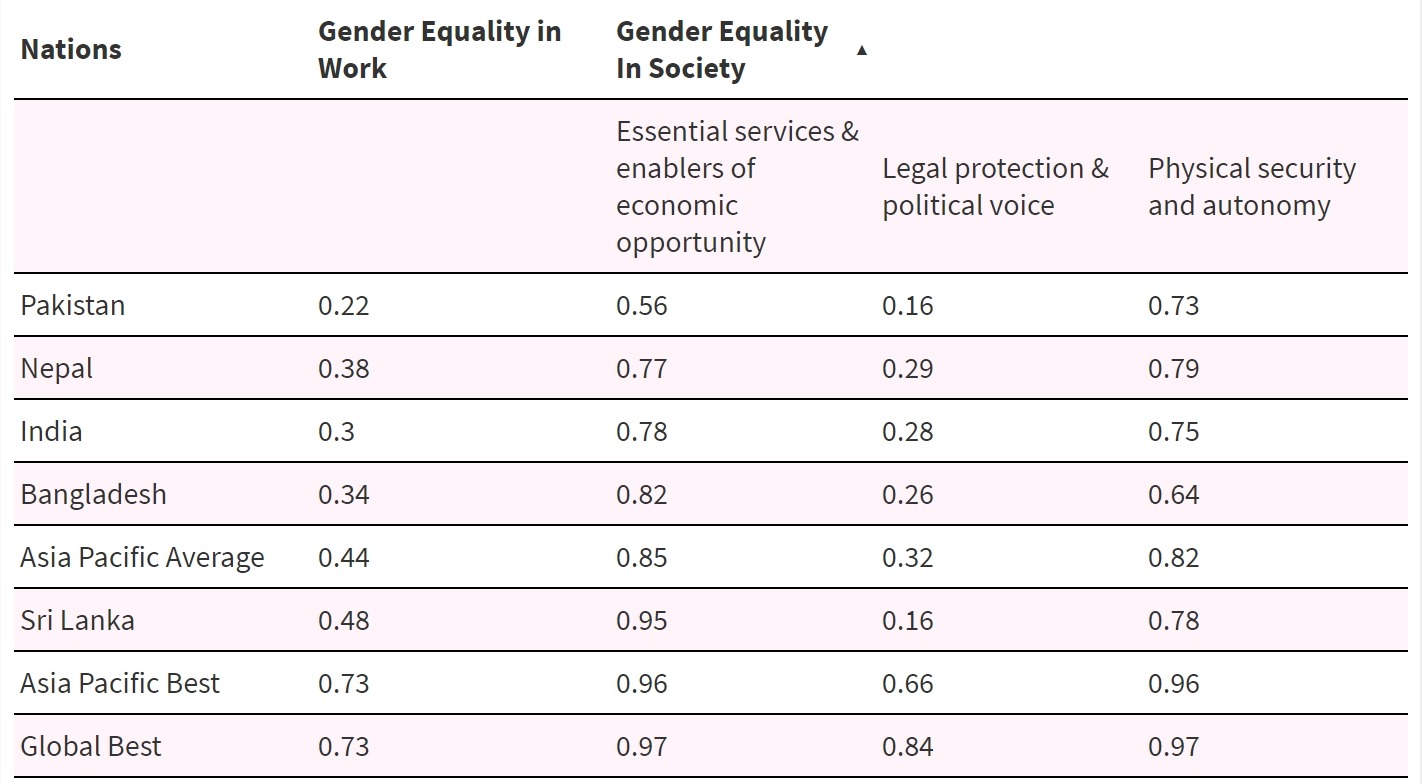 The above data narrates the whole story of SAARC Nations. The GPS of Asia Pacific as a whole is 0.56 (higher gender inequality), and lower than the global average of 0.61. On almost every parameter SAARC Nations are worst-performing in comparison to the Asia Pacific and Global Best Score. When it comes to India, it has the worst score on most of the parameters among SAARC Nations. If the Government across the Asia Pacific focuses on these issues it could add $4.5 trillion to their collective annual GDP by 2025. This is what MGI reported in its 2018 report on the "Power of Parity". Coming to specific countries of SAARC Nations, India is the highest beneficiary of advancing women parity in the whole of Asia. The MGI reported that advancing women parity could add $700 billion, $20 billion, $3 billion, $30 billion, $30 billion in India, Sri Lanka, Nepal, Bangladesh, and Pakistan's GDP respectively by 2025, which is 18%, 14%, 9%, 8%, & 7% improvement respectively over business-as-usual GDP.

The well-acknowledged organization's data very clearly paint the picture of the power of gender parity or non-discrimination on the basis of the gender of an individual. It is evidently clear that equal participation of women in economic activities is highly inducive for the progress of a country. And for participation in economic activities, there is an urgent and unavoidable need for access to finance. But unfortunately, there is a huge gap in terms of accessibility of funds by men and women across the globe. There are significant development gains to be made in safeguarding women's equitable access to and control over economic and financial resources, including in relation to economic growth, poverty eradication and the well-being of families and communities. The footprint of inequality in access to resources constitutes a global challenge with insinuation at individual, family, community and national levels.

The most important reason cited in the academic debate for such a very important problem is that of the lack of mortgage and security for accessing finance or taking a loan for women. The reasons for this include culture, lack of traditional collateral (such as land or property which is often registered in men's name), women's lower income levels relative to men, and financial institutions' lack of appetite to design appropriate products and outreach strategies to reach women. For example, secured property rights to assets that borrowers can pledge as collateral are said to increase access to capital

International Finance Corporate (IFC) Business Report-2014 data shows that of the total financing demand of US $158 billion (around Rs.9.64 trillion) for women-owned businesses, formal sources provided just the US $42 billion in 2012, leaving a significant gap of US $116 billion that financial institutions can meet through specially tailored products and services. It is estimated that over 90% of finance requirements for women-owned enterprises is met through informal channels.

Furthermore, the recent NSSO (6th Economic Census) report depicts that as many as 79% of enterprises run by women are self-financed; only 4.4% have borrowed money from a financial institution or received assistance from the government. Gender bias and culturally entrenched system are affecting their chances to access credit.

For instance, most banks look for some collateral even while lending to small enterprises, while a majority of Indian women, especially in rural areas, do not have title rights on the property that can be used as collateral. Male members of the family, meanwhile, do not always want to invest their capital in businesses run by women due to a lack of confidence in their ability to run the venture successfully. Moveable collateral registries can encourage banks to design products that look beyond traditional collateral such as against account receivables.

Recent news shows that in countries with reformed laws governing collateral, moveable property such as inventory, accounts receivable, livestock, etc are considered excellent collateral and result in better loan terms, increased access, and a more competitive financial sector. These findings though not sex-disaggregated can be particularly significant for women entrepreneurs who lack immoveable assets.

Ensuring that women are included in land titling programs and introducing tax and stamp duty incentives to encourage joint property registration/property transfer could help increase women's property ownership. There have been some recent attempts at women's asset creation through loan products. There is also a general aversion by financial institutions to fund high-risk small businesses. This forces them to approach moneylenders, who typically charge exorbitant interest rates, besides semi-formal sources such as chit funds. In the event of constraints in accessing credit, it forces them to tap alternative sources of finance which involve higher transaction costs as well as interest costs as compared to bank finance.

Multiple growth constraints (like poor infrastructure, obsolete technology, inadequate market linkage, etc.) faced by women-owned enterprises can be largely linked to inadequate access to finance. It is, therefore, in terms of performance, previous studies clearly revealed that women-owned firms are smaller in size and more likely to fail and have a lower level of profits, sales, and employment than firms owned by men.

Now the time has come to ignite the debate for women participation in the economic activities and established giant, big and small enterprises led by women, at the same time making women's empowerment to be an integral part of policies. Empowerment cannot be assumed to be an automatic outcome of financial programs, whether designed for financial-sustainability or poverty targeting.

Unless gender policy and empowerment are an integral part of the planning process, the rapid expansion in eliminating the constraints to access to finance is unlikely to make more than a limited contribution to empowerment. This is how the inequality or gap between men and women is going to be abridged in male-dominated societies. Financial institutions too have to change their ways or policies to finance and extend credits to women keeping in mind the societally driven inabilities of women.

Dr. Sumanjeet is an Assistant Professor in Department of Commerce, Ramjas College (University of Delhi), Delhi

Shashank Vikram Singh is a Research Scholar, University of Delhi

(Disclaimer: The opinions expressed are the personal views of the authors. The facts and opinions appearing in the article do not reflect the views of Devdiscourse and Devdiscourse does not claim any responsibility for the same.)

RCom's committee of creditors to meet on Monday

Tyler Seguin scored the go-ahead goal late in the second period as the Dallas Stars skated to a 2-1 victory over the visiting Chicago Blackhawks on Sunday afternoon. Joe Pavelski also tallied and Anton Khudobin made 31 saves for Dallas, whi...

French Health Minister Olivier Veran said on Sunday that he would talk with his European counterparts soon to discuss how best to cope with a possible epidemic risk in Europe as Italy battles with an explosion of coronavirus cases. Veran al...