Why did CW cancel Supergirl Season 7? Know the real reason!

The CW superhero series, Supergirl has delivered one of the most incredible adventure and entertainment series that small screen viewers have ever seen. The series won millions of hearts worldwide. Supergirl is the first female-led story for the small screen since Lynda Carter's Wonder Woman came to an end 36 years earlier.

Melissa Benoist who played the title role across the six seasons has been hugely praised for her performance as Kara. After the sixth season, the showrunners pitched Supergirl Season 7 but was rejected by The CW.

After the six-year-long journey, the fifth season was wrapped up rather quickly on May 17, 2020, due to the Covid-19 pandemic. The creators announced at the time that the DC comic-based American television series Supergirl would conclude with Season 6.

The series finale concluded by showing Cat Grant reacquiring CatCo and offering Kara a job as her editor-in-chief. Cat and Lena convince Kara (played by Melissa Benoist), the steel girl to accept the job and reveal her true identity to the world so she can live a more full life as one person. But wait! That's not going to be the end of the Supergirl series. As per the Comic Book, Kara Danvers will fly off to the future and join the superheroes' team.

Recently, several actors from the Superhero series joined the UK convention The Ultimates on May 7 and 8. Jesse Rath, who portrayed Brainiac 5 in Supergirl Season 3, shared some interesting details about the show and a Supergirl season 7 that almost happened.

One fan, @WelshdragonU who was present in the show shared that Rath stated during the panel that Jessica Queller and Robert Rovner initially pitched The CW on Supergirl Season 7 without Benoist herself. But CW rejected the seventh season and decided that Season 6 would be the final season. The post reads:

"Asked if there could've been the 7th season of #Supergirl, Jesse told us Rob & Jessica pitched a 7th season without Kara, but The CW refused. He then told us the original plan was to have a 13 ep 6th season & a 10 ep 7th season - fulfilling Melissa's original 7 season contract." 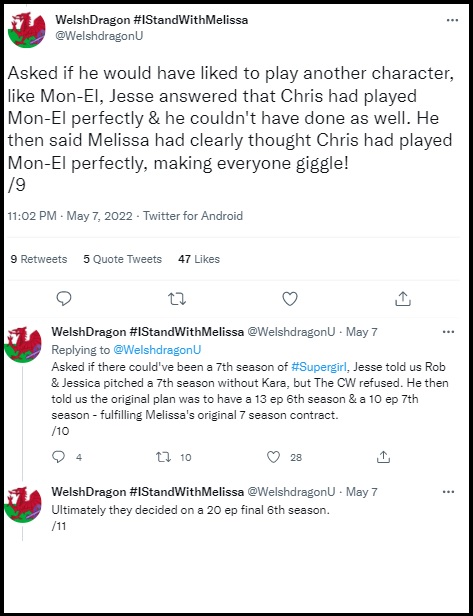 There are more reasons behind the cancellation of The CW's popular superhero series. Firstly, in 2020, The CW and producers Warner Bros TV and Berlanti Productions announced that the drama would conclude with Season 6, which finally premiered this year. The production of Supergirl Season 6 also badly suffered due to the pandemic. Moreover, the filming was also delayed as a result of Melissa Benoist's pregnancy.

Additionally, Supergirl is usually followed by three million viewers but the rate came down to almost half during Season 5. Each episode of the fifth installment was viewed by 1.6 million people per week.

While The CW's DC Arrowverse Supergirl Season 7 is not happening, Kara could be back in a new form in the future.

Stay tuned to get more updates on television series!

Astronomers merge Hubble's ultraviolet and visible-light view with Webb’s in...