Have Keanu Reeves and Dwayne Johnson joined the Area 51 squad?

Some pictures of celebrities like Keanu Reeves, Dwayne Johnson with captions confirming their participation in the potential "raid" on Area 51 have gone viral on social media. Over 1 million people have signed up for the "Storm Area 51" event on Facebook and over 800 thousand people are interested in the event that aims to "raid" a heavily guarded United States Air Force facility. 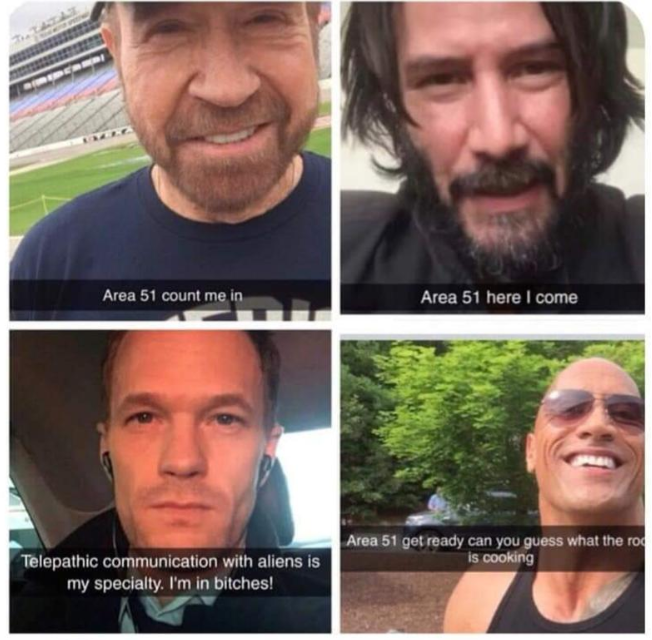 Now going through their profiles on different social media platforms, we could not find any such post about Area 51 and some pages that had shared it only meant it as a joke.

The Facebook event, which is scheduled for September 20, has become a rage among people catching the attention of hundreds of thousands in just a matter of a few days and is now trending on other social media platforms as well. Hilarious memes are lightening the mood while also giving a reality check to many as the potential "raid" on Area 51 might not be possible.

The aliens throwing me off their ship after I keep telling them my life problems #Area51 pic.twitter.com/wJzIn2B2IC

Pandemic must be impetus, not obstacle, for clean water access

To make matters worse, there are suspicions that the inadequacy of wastewater treatment methods in California, the rest of the USA, and indeed around the world may help to propagate the disease even more widely. ...

Devin Booker scored a game-high 35 points as the Phoenix Suns remained unbeaten during the NBAs restart with a 119-112 victory over the Miami Heat on Saturday night near Orlando. Phoenix also got 18 points and 12 rebounds from Deandre Ayton...

Nagasaki urges nuke ban on 75th anniversary of US A-bombing

The Japanese city of Nagasaki on Sunday marked its 75th anniversary of the US atomic bombing, with the mayor and dwindling survivors urging world leaders including their own to do more for a nuclear weapons ban. At 1102 a.m., the moment the...

Thousands of people gathered on Saturday to protest against Israeli Prime Minister Benjamin Netanyahu outside his official residence. According to The Times of Israel, as many as 15,000 people were present at the protest site while organise...

Pakistan on Sunday violated ceasefire by firing with small arms and shelling with mortars along the Line of Control LoC with mortars in Mankote sectors in Jammu and Kashmirs Poonch. Pakistan violated the ceasefire at about 645 am today.Indi...